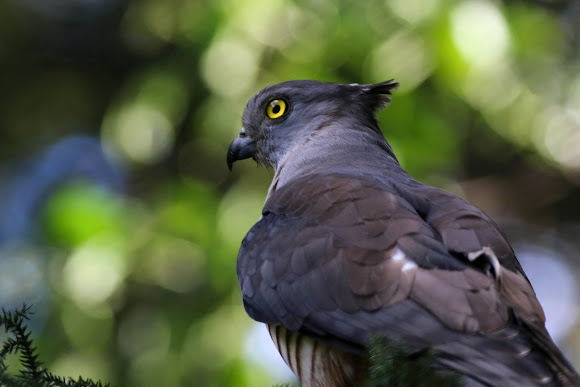 The Pacific Baza is a medium-sized, long-tailed hawk with a prominent crest. It is slim-bodied, with a narrow head and neck. The wings are paddle-shaped, well-rounded and deeply 'fingered'. The head, neck and breast are grey and the underparts are white with bold dark banding. The legs are short with weak toes. The eyes are golden-yellow and domed, placed well on the side of the head, giving a slightly 'pop-eyed' look. The female is heavier and browner on the crown than the male. It is also known as the Crested Hawk or Baza, or the Pacific Cuckoo-Falcon.

Spotted in backyard amongst patches of rainforest & hoop pines.

Thanks geoffrey and nayeli!! I love their eyes!

Thanks a lot neil and mark! Theres a pair that's been hanging around for a few years now but they're usually up much higher. I got very lucky, at one point he was only about 10 metres away and wasnt phased by me at all!

Super shots Alice. They sure are handsome birds.

Well done, Alice. These are fantastic photos!! I saw my first Pacific Baza's only a few weeks ago, in my local park of all places. It was a pair, so I felt double blessed. Got lousy photos though, so I'm really envious of yours.

Thanks marta, he was gorgeous and very kind to sit so close! Thanks sera I'm very lucky to have so many species in my yard, we've been planting it out with natives for the past 14yrs and the number of species has been increasing ever since! It also helps that ive just had some chickens hatch that he had his eye on!

Stunning! Yr so lucky to have them in your backyard - great shot

Thanks very much Mac!