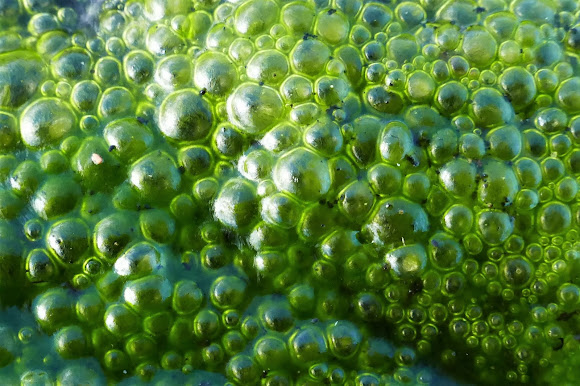 A species of freshwater green algae spotted in a boggy area on the slopes of Mt. Norman. This algae had a slimy texture, but there was no evidence that I could see to suggest it was a filamentous species. Surface area covered mostly by gas bubbles, and overall consistency was very watery. Perhaps this is an indication it's a bacterial algae, and not a plant? This will be near-impossible to ID, but I will try to narrow down some potential ID candidates. Here's a PDF I found for Girraween, so it's bound to be one of these, surely - http://www.rymich.com/girraween/download... - not that it helps in any way to ID this spotting, but I does show how many species of algae there are, and how futile it would be to even guess at an ID.

Should this be a freshwater blue-green algae: Despite their name, blue-green algae are actually types of bacteria known as Cyanobacteria. Some species have the potential to produce toxins. This cannot be determined by ‘naked eye’ inspection; only a laboratory analysis can verify the potential for toxicity. Blue-green algae (Gloeocapsa atrata) is known to occur in Bald Rock Creek.