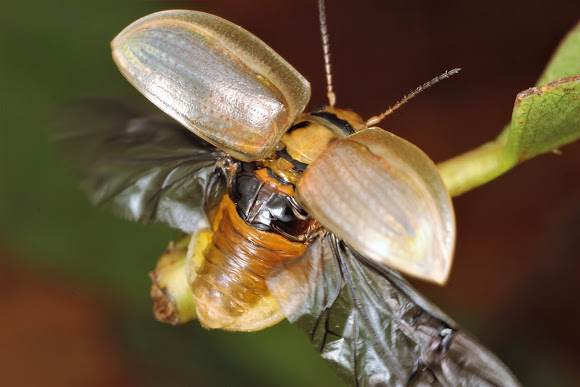 A pale white leaf beetle about 8mm long with two pronotal maculae. This beetle is female. It is bivoltine, having two generations per season and the winter stage is red and sexually immature until the next spring.

Widespread feeding on foliage on a wide range of Eucalyptus species. It is occasionally found on the mainland at higher altitudes, which share the Tasmanian colder temperatures.

This species is extremely common in Tasmania and late in summer millions are washed up on the beaches on the southern coast of Tasmania. It is theorized the sparkling waves of the ocean look similar to shiny foliage of the forest canopy and the critters get confused. It has been researched extensively as it is one of the more serious pests of the hardwood industry in Tasmania where you can hardly find a Eucalyptus leaf without some bites taken by a hungry beetle. Some paropsines have escaped to other parts of the world, such as California, that buy Eucalyptus seedling stock from Tasmania and become serious problems.

Thank you Sergio.
Thank you Ashley.
Still wearing that snake, I see.
I added a bit more data for your interest. It is certainly not a rare species but just a lucky snap with the tricky canon ME65mm macro lens (no cropping).

Awesome pic, Martin. I love that kind of photo, when the beetle is just taking off. And of course, it is very nice to have you back.

We got a bit of rain, two days of four. This season has been good for beetles based on good spring rains.

Hmm.. Tas high country.. was it dry up there?

Thanks Antonio, maplemoth and Daniele.
I've been focused on the local bowerbird.org andmy study of beetles.

This beetle is very common in Tasmania and washes onto the beaches by the millions.

Great shots of this interesting beetle Martin! Nice to have you back.