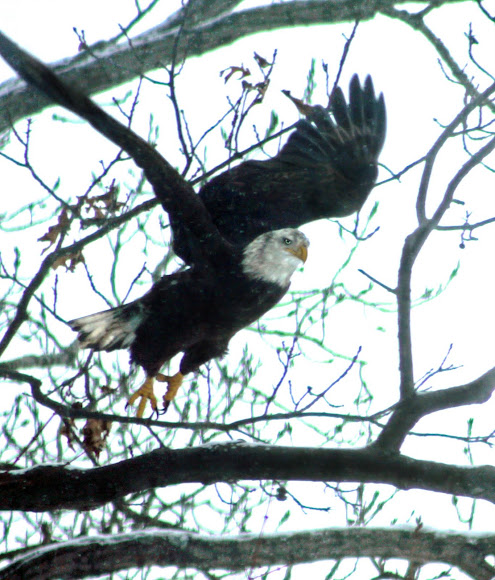 The bald eagle (Haliaeetus leucocephalus), our national bird, is the only eagle unique to North America. The bald eagle's scientific name signifies a sea (halo) eagle (aeetos) with a white (leukos) head. At one time, the word "bald" meant "white," not hairless. Bald eagles are found throughout most of North America, from Alaska and Canada to northern Mexico. About half of the world's 70,000 bald eagles live in Alaska. Combined with British Columbia's population of about 20,000, the northwest coast of North America is by far their greatest stronghold for bald eagles. They flourish here in part because of the salmon. Dead or dying fish are an important food source for all bald eagles. Eagles are a member of the Accipitridae family; which also includes hawks, kites, and old-world vultures. Scientists loosely divide eagles into four groups based on their physical characteristics and behavior. The bald eagle is a sea or fish eagle. There are two subspecies of bald eagles. The "southern" bald eagle, Haliaeetus leucocephalus leucocephalus, is found in the Gulf States from Texas and Baja California across to South Carolina and Florida, south of 40 degrees north latitude. The "northern" bald eagle, Haliaeetus leucocephalus alascanus, is found north of 40 degrees north latitude across the entire continent. The largest numbers of northern bald eagles are in the Northwest, especially in Alaska. The "northern" bald eagle is slightly larger than the "southern" bald eagle. Description: Bald eagles are one of the most recognizable birds in the United States. If you don’t remember what a bald eagles looks like, simply pull out a quarter or a dollar. An eagle is shown on the back of the quarter and holding an olive branch and arrows on the one dollar bill. Bald eagles are large, predatory raptors. They are dark brown on the body and wings. The head and tail are bright white. The feet and bill of bald eagles are yellow. The bill is large and hooked at the tip. Juvenile bald eagles look very different from the adults. Young bald eagles are almost entirely brown with occasional white markings on the underside of the wings and chest. As the juvenile gets older, the bill will turn from dark brownish-black to yellow and the head and tail turn white. Size: Bald eagles grow to about 2 ½ - 3 feet in height. They have a wingspan of about 6 ½ feet. Female bald eagles are larger than the males. Diet: Bald eagles love fish! When fish are not available, bald eagles will eat whatever they can catch including small birds, rodents, and dead meat. Bald eagles have no problem stealing food from other birds! Typical Lifespan: Bald eagles can live to about 20-30 years of age in the wild. They live even longer in captivity. Bald eagles in the wild face a lot of threats that reduce their lifespan, including chemical pollutants, such as mercury, persistent organic chemicals, heavy metals and DDT. Communication: Bald eagles call to each other with a high-pitched whistle or chirp. Life History and Reproduction: Bald eagles are solitary, but monogamous animals. Although they spend winters and migrations alone, bald eagles maintain the same breeding pair year after year. A mated eagle pair finds a nesting site and produces offspring each year. If one of the pair dies, the surviving bald eagle will look for a new mate in the next breeding season. The nests are built on the tops of trees. The pair uses sticks and twigs to construct a platform nest. Some pairs return to the same nest the following year. Bald eagles normally lay two or three eggs. The eggs are incubated for about 35 days. Depending on the location, the eggs are laid in the winter or spring. There are not really any predators that threaten the bald eagle chicks or eggs as the parents are almost always on the nest and they are quite powerful and large birds. For about 2 ½ months, the parents will care for the chicks by bringing food to the nest. The chicks take their time leaving the nest. After approximately 12 weeks, they work their way out on the branches near the nest. They'll learn to fly but stay in the nearby area. The parents continue to provide some food until the young are independent. Young eagles are on their own until they are about five years old. During their juvenile years, they will go through several color changes and molts. At about 5 years of age, they'll look for a mate.

Range: Bald eagles are North American birds. Their range extends from the Mexico border through the United States and Canada. Bald eagles are extremely populous in Alaska! Not everyone can wildlife watch for bald eagles year-round. If you live in Alaska, along the East and West coasts, the Rocky Mountains and the Mississippi River then you can see bald eagles all year. The rest of the United States only sees bald eagles during the winter and their migration. Bald eagles like lakes – big lakes. During the summer, they can be seen soaring above lakes and in the nearby trees. They prefer lakes and reservoirs with lots of fish and surrounding forests. In the winter, bald eagles can be seen around unfrozen lakes and hunting along coastlines, reservoirs and rivers. During the migration, bald eagles are seen near all types of water habitats.

Studies have shown that "northern" bald eagles fly into the southern states and Mexico, and the "southern" bald eagles fly north into Canada. Because of these finding, the subspecies of "northern" and "southern" bald eagles has been discontinued in recent literature. Bald eagles were officially declared an endangered species in 1967 in all areas of the United States south of the 40th parallel, under a law that preceded the Endangered Species Act of 1973. Until 1995, the bald eagle had been listed as endangered under the Endangered Species Act in 43 of the 48 lower states, and listed as threatened in Wisconsin, Minnesota, Michigan, Washington and Oregon. In July of 1995, the US Fish and Wildlife Service upgraded the status of bald eagles in the lower 48 states to "threatened." On June 28, 2007 the Interior Department took the American bald eagle off the Endangered Species List. The bald eagle will still be protected by the Migratory Bird Treaty Act and the Bald and Golden Eagle Protection Act. The Bald Eagle Protection Act prohibits the take, transport, sale, barter, trade, import and export, and possession of eagles, making it illegal for anyone to collect eagles and eagle parts, nests, or eggs without a permit. Native Americans are able to possess these emblems which are traditional in their culture. http://www.baldeagleinfo.com/ Threats to Bald Eagles: * Pollution and Chemicals – Bald eagles almost went extinct from DDT and now face new pollutant threats such as mercury, persistent organic chemicals and heavy metals. * Habitat Loss