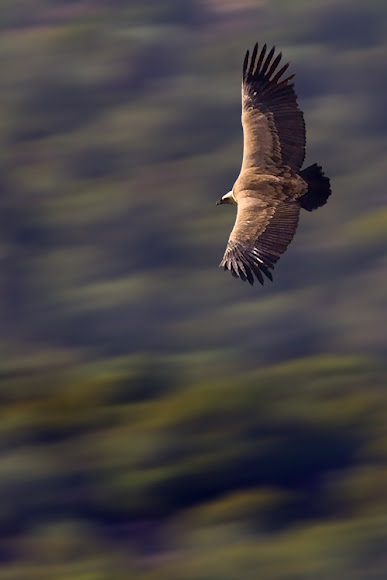 Wiki: (...) Hatched naked, it is a typical Old World vulture in appearance, with a very white bald head, very broad wings and short tail feathers. It has a white neck ruff and yellow bill. The buff body and wing coverts contrast with the dark flight feathers(...)

In Portugal there are at least two major colonies: one at the northern region, at Douro river and another at Tejo river (both are situated close to the borders with Spain. This one was spotted at Tejo river. note: one can find a lot more of sites through Europe, on wiki.

Update: adding a new mission... The sun had just made is appearance in the horizon and as the temperatures start to rise, so did the Griffons. I was waiting on the top of the closest peak when I captured this image. Hope you enjoy it... APaz

Incredible photo! Capturing at such a high speed must've presented a challenge. The results are sunning.