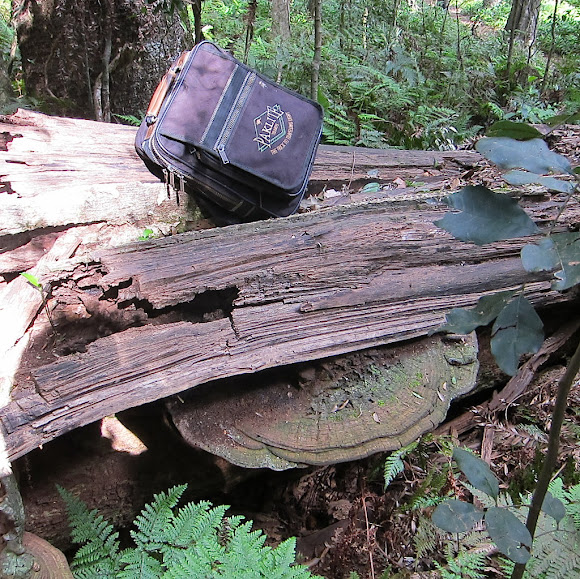 This is the largest bracket fungi I have ever seen (photos 1 & 2). There were four specimens in all, the largest of which was over 2½ feet wide. The second largest (photos 3 & 4) was only half the size, and the section of trunk it was attached to had rotted away, and the bracket was loose. All were found on the same fallen tree, a Queensland Red Cedar (Toona ciliata). These large brackets are quite old, and this was obvious not only because of their size, but also by the advanced decayed state of the tree. Spotting possibly Southern Brackets (Ganoderma australe), but I just can't be 100% sure, hence no positive ID. PS: 14 June, 2019 - I can see it now. These are Southern Brackets. The fourth photo in this set shows the cracked surface of the brackets, and this is something I recognise as I've also seen it in other spottings of the same species. This is a wood-decaying fungus.

Once again my backpack, albeit a small one, comes to the rescue to give a sense of scale. It's better than nothing. NB: The tree had not been logged, but had fallen of its own accord.

It is a small backpack - great for day trips. Scored it at the op-shop :-) This is a great bracket, Mark. You've probably come across these on your travels.

I didn't know they made such small backpacks. Incredible !!

Thanks, Jae. The big one was pretty impressive.