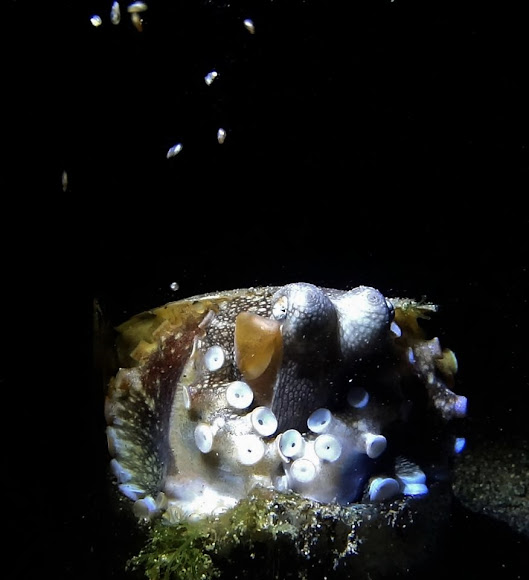 Amphioctopus marginatus, also known as the coconut octopus and veined octopus, is a medium-sized cephalopod belonging to the genus Amphioctopus. It is found in tropical waters of the western Pacific Ocean. It commonly preys upon shrimp, crabs, and clams, and displays unusual behaviour, including bipedal walking and gathering and using coconut shells and seashells for shelter.

Sandy bottom where they are able to dig into the sands to hide.

A very smart octopus, they can collects sea shells, coconut shells (hence, their name), bottles, cups and other hard objects to use as protection. In the pictures and video above, this female is using a broken bottle for protection. She is releasing her babies by batches using her siphon, each time, a few hundreds of fully developed babies are released. Not all embryos are fully developed yet and this process will takes a few days. After releasing all her babies, she will die because during the incubation period, she will not be feeding. The tiny white dots on the top of Pic #1 are the babies. Pics #2 & #3 shows her taking shelter in the broken bottle. Please watch the video to see her releasing her babies.

Nice that you have also seen them, @Muckpuk :)
Over in Anilao, its practically guaranteed you can see them, lots of them but nicer to see them on a night dive where they are more active, so that you can see more of their behaviors.

Wonderful series AlbertKang! I have seen the coconut octopus in Lembeh Sulawesi and could have just followed it for hours. What a great spotting.