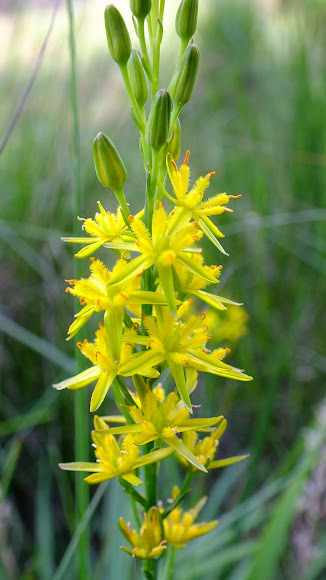 Bog asphodel produces bright yellow star-like flowers on leafless stems. On the damp heaths and peatbogs in which it is found, this is often the brightest show of colour around. The anthers are bright reddish-orange, and when the plants have finished flowering, the stems take on a deep saffron colour. The scientific name ossifragum means 'bone breaker' and refers to the old belief that after grazing on this plant the bones of sheep became brittle. This belief was mistaken, however, as bog asphodel was not the culprit; it was due to the calcium-deficient vegetation found in the habitats in which the plant grows. This plant has been used as a cheap substitute for saffron and as a dye.

As the common name suggests, bog asphodel is found in wet, boggy habitats including wet heaths, moors and raised, valley and blanket bogs. It is also found in wet acid habitats on mountains, up to altitudes of 1000m, and is unable to tolerate shade.

Spotted at Gerritsflesch wetland, Veluwe, Holland. In the Netherlands Narthecium ossifragum is listed as vulnerable on the 2012 national red list of vascular plants. (sources:see reference)