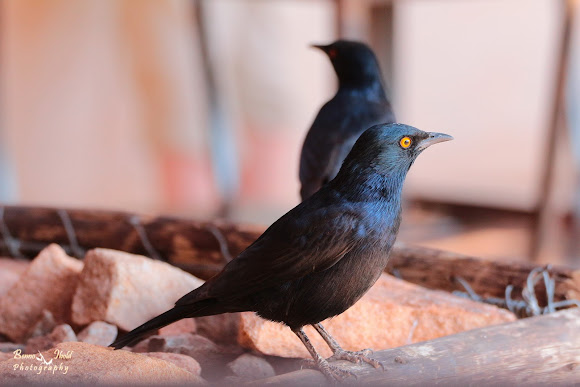 Lamprotornis is a large genus of glossy-starlings all of which occur in Africa south of the Sahara. They have glossy blue or green upper parts, which is due to hollow melanin granules arranged in a single layer near the feather barbule's surface. This unique arrangement led to some glossy starlings formerly placed in the genus Spreo being transferred to Lamprotornis, since they shared this feature (but see also below). The under parts of these species lacks iridescence. They may be blue, purple, yellow or brown. Most Lamprotornis starlings have striking yellow or red irides and some have long tails. These glossy starlings are found in a variety of habitats from forests to open woodland and gardens. They nest in tree holes, either natural, or made by woodpeckers or barbets, and some will used man-made structures. Most species are resident apart from seasonal or local movement, but Shelley's starling is migratory. Most species are gregarious outside the breeding season. Lamprotornis glossy-starlings are omnivorous and mostly feed on the ground, although they will take fruit from trees. Some will feed on or near large mammals to find insects.

The Cape starling, red-shouldered glossy-starling or Cape glossy starling (Lamprotornis nitens) is a species of starling in the Sturnidae family. It is found in Angola, Botswana, the Republic of the Congo, Gabon, Lesotho, Mozambique, Namibia, South Africa, Swaziland, Zambia, and Zimbabwe.