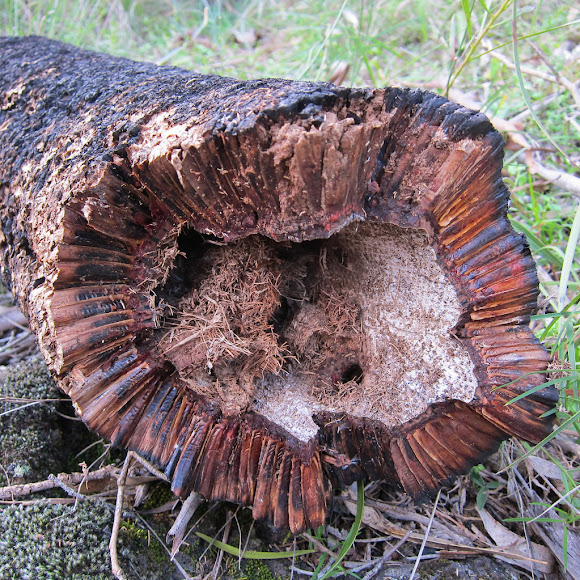 When I see Grass Trees I think of the Australian bush with all its quintessential sights, sounds, and smells. The lead photos in this series show the internal structure of the tree, something we usually don't get to see. Each 'leaf' develops the black trunk over time, compresses and becomes wooden and hard. It's also hollow, and in this spotting someone has made a little nest; a ready-made home. This trunk has also been burnt in the past (many times, I would think). The growth rate of Xanthorrhoea is incredibly slow, and it's often generalized that all species grow at the rate of about 2½ cm per year. Actually, after the initial establishment phase, the rate of growth varies widely from species to species. Thus, while a five-metre-tall member of the fastest growing Xanthorrhoea may be 200 years old, a member of a more slowly growing species of equal height may have aged to 600 years. I have no idea which category X. glauca falls into, but I guarantee some of the specimens at this spotting are old-timers by Grass Tree standards. The various Xanthorrhoea species would have originated in the times of Gondwana. Old-timers indeed!

Spotted in eucalypt forest on the exposed western ridge of the Bunya Mountains National Park, southeast Queensland. Here's some park info - http://www.nprsr.qld.gov.au/parks/bunya-... It was quite amazing walking from the lush, subtropical rainforest into this drier eucalypt region. It was instantaneous, almost like walking through a doorway. Two different ecosystems side-by-side.

The best known common name for Xanthorrhoea is Black Boy. This name refers to the purported similarity in appearance of the trunked species to an Aboriginal boy holding an upright spear. Some people now consider this name to be offensive, or at least belonging to the past, preferring instead Grass Tree. PS: The exact ID of this spotting was provided by the Queensland NP service, and that's a good thing because there are 28 species and five subspecies of Xanthorrhoea. I would have had buckley's chance of identifying the exact species otherwise.