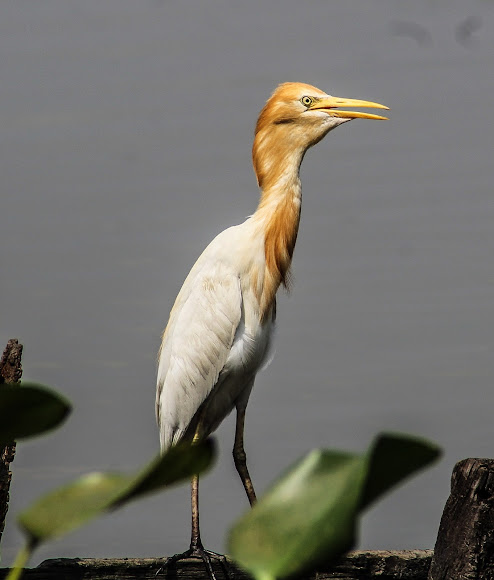 The cattle egret is a stocky heron with an 88–96 cm (35–38 in) wingspan; it is 46–56 cm (18–22 in) long and weighs 270–512 g (9.5–18.1 oz).It has a relatively short thick neck, a sturdy bill, and a hunched posture. The non-breeding adult has mainly white plumage, a yellow bill and greyish-yellow legs. During the breeding season, adults of the nominate western subspecies develop orange-buff plumes on the back, breast and crown, and the bill, legs and irises become bright red for a brief period prior to pairing. The sexes are similar, but the male is marginally larger and has slightly longer breeding plumes than the female; juvenile birds lack coloured plumes and have a black bill. B. i. coromandus differs from the nominate subspecies in breeding plumage, when the buff colour on its head extends to the cheeks and throat, and the plumes are more golden in colour. This subspecies' bill and tarsus are longer on average than in B. i. ibis. B. i. seychellarum is smaller and shorter-winged than the other forms. It has white cheeks and throat, like B. i. ibis, but the nuptial plumes are golden, as with B. i. coromandus.Individuals with abnormally grey, melanistic plumages have been recorded. The positioning of the egret's eyes allows for binocular vision during feeding, and physiological studies suggest that the species may be capable of crepuscular or nocturnal activity. Adapted to foraging on land, they have lost the ability possessed by their wetland relatives to accurately correct for light refraction by water. This species gives a quiet, throaty rick-rack call at the breeding colony, but is otherwise largely silent.

The cattle egret has undergone one of the most rapid and wide reaching natural expansions of any bird species.It was originally native to parts of Southern Spain and Portugal, tropical and subtropical Africa and humid tropical and subtropical Asia. In the end of the 19th century it began expanding its range into southern Africa, first breeding in the Cape Province in 1908.Cattle egrets were first sighted in the Americas on the boundary of Guiana and Suriname in 1877, having apparently flown across the Atlantic Ocean.It was not until the 1930s that the species is thought to have become established in that area