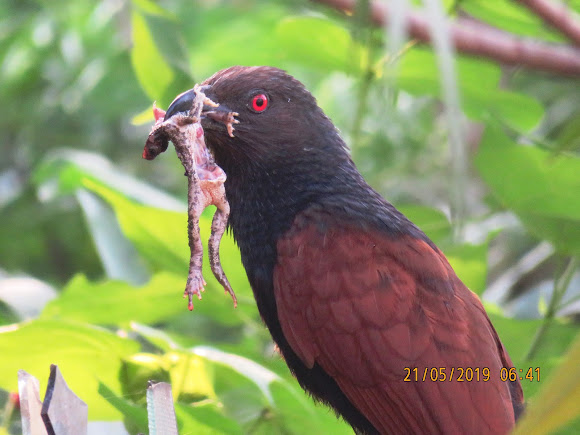 Large bird. Clumsy flier. Body black. Wings rust coloured. Crow like beak but pheasant-like tail that may be spread like a blunt fan. Eye is like a gleaming ruby gem. Enjoying a breakfast of young toad. Poor Frog (Toad) Prince met a grisly end with its innards eaten already.

On a wall studded with broken bits of glass to deter intruders. Outside the wall is a patch of land lying abandoned for years. This is where I often spot a few species of birds including this Crow pheasant.

It has a resonant call. Kubo pakhi (bird) in Bangla. Apparently, in British India, the newly arrived sahibs often mistook it for a pheasant but discovered that it was disgusting in flavour. They gave it the nickname of "Griff's pheasant" I could not find out who poor Griff was.

Thank you triggsturner...this is such a logical explanation...I have tried goggling but nothing came up...Really happy to have it tied up....hatr loose ends.

I don't know if it is related but Griffs is often the shortened name for the Griffon hunting/retieving dog breed. Perhaps they thought the bird was only good for feeding the dogs with?

Congrats Sukanya on your SOTW. Only just discovered it. Lovely series, well done.

Good catch, congratulations. I've always known this bird by its other name of Greater Coucal.

Thanks Brian...and Neil, I NEVER thought of that possibility that Griff Sahib fed it to the other sahibs Hee hee hee...most likely you may have described what happened...and thanks for the kind words. Getting SOTW for something you photographed on your morning walk...how lucky can you get!!

Poor ole Griff was probably the one who fed the sahibs the pheasant, hence the "poor ole..."? Congratulations on your much-deserved SOTW, Sukanya. This is a great spotting.

Thank you, PN. You made my day! Thank you Tukup and I am sure Poor ole Griff whoever he was is saying Thank You too.

Way to go Sukanya! It looks like you zoomed in on the red eye just right :-) Congratulations. Well done.

Congratulations SukanyaDatta, your crow pheasant, Centropus sinensis, has been voted Project Noah’s Spotting of the Week!


With striking red eyes, this bird was beautifully spotted by SukanyaDatta in West Bengal, India. The crow pheasant is a non-migratory bird found mostly in India, China and Indonesia. Here feasting on a small frog, this bird has a wide diet including insects, bird eggs, nestlings, fruits, seeds, caterpillars and small vertebrates.

YEAH! 40 X Optical zoom in a hand-held. I am a total Zoom-fanatic. You'll get used to the camera's idiosyncrasies and the weight and then it will be like an extension of your hand. Good luck.

I got the Canon PowerShot SX740 HS. I like it except the shutter doesn't work when you press all the way down, but when you let up. That's going to take some getting used to. I've already missed a couple shots thinking when I depressed it the whole way the picture was taken. It's got a GREAT zoon thought :-)

Thank you Tulup...what camera did you buy? Looking forward to more
Of your
fantastic spottings.

Great series and notes Sukanya. I've been off for a while so belated congratulations on your nomination for SOTW. Fantastic fotos. FYI-I have my new camera now so hope I can get some closer shots of birds. Gotta keep those lists growing :-)

It's the eye...that intense red eye! I'm with everybody else, who was this poor Griff?! Thank you for sharing Sukanya! :) Liana

Will need a powerful masala if you catch up with him.

Thanks Neil.WHO Was this Grif?