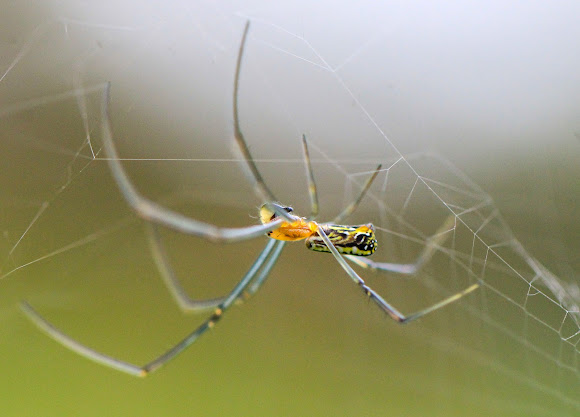 A brightly coloured spider which looks like a small or young member of the Nephilinae (golden orb weaver). The Leucauge are a genus in the Tetragnathidea family (Long Jawed Orb Weavers). Because of a vague description and the loss of an only specimen in 1832, the genus became ill defined and acted as a waste basket containing some 300 loosley related species. After reaserch in 2010, the genus of Leucauge was revised. These spiders are easily identified now with their body shape, and silver, black and yello markings of females. They also have two rows of slender and long hairs on the femurs of the forth leg. What made this spider interesting to shoot was the fact that the web, as in most cases, was slanted instead of vertical and the spider was in the middle with its underside facing upward.

Low base vegitation on garden borders or bushvelt.

I am yet to find out why this genus is inverted or likes to be 'upside down' in its web. I have a theory that in a slanted web, being on the downward facing side puts the web between the sky and the spider and perhaps acts as a defence or camoflage from arial predators. As a bonus, prey caught in the web are exposed to the jaws of the spider on the other side of the web making for a much faster attack and capture.