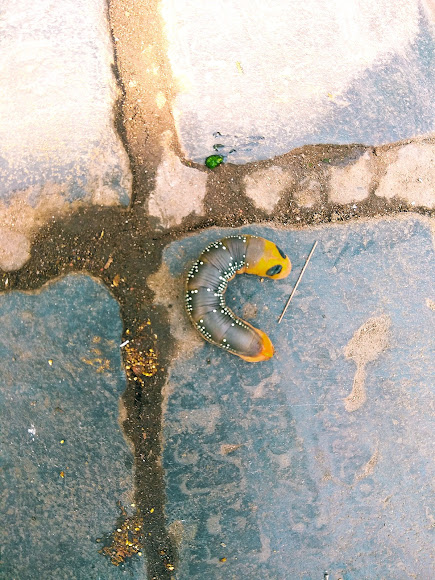 At first sight I called it an alien moth because of its large eye like structures on its head and shiny dots bodering it's body. Then I googled about it and came to know about its real name .

On my way to tution class, I found it crawling under a tree at Amherst Street road, kolkata , near the mosque(I didn't take a notice of the tree, extremely sorry for that) . It was doing some weird curve dance with each of my footed steps . I even took a video of that crazy dance😅

This moth is commonly known as poison eating moth because it feeds on the leaves of Nerium Oleander, which are toxic to humans and a no. of other animal species. These caterpillars are immune to the toxicity of these leaves. The one I spotted is at its last stage of Caterpillar before turning to cocoon. When they are first born , they are a pale blue colour. This slowly changes to green as the larvae age . The alien like eeric blue eyes aren't actually eyes. These are spots to make it look dangerous to its predators.

Hi Suchandra and welcome to PN.
It makes some sense to me that a species which develops huge false eye spots is likely to use them to scare you away. Maybe that was the dance. ;-)
By the way there's no need to 'suggest' an ID on your own spotting. We usually just write into the notes and thoughts around species names.

@SukanyaDatta yea it's in pre-adult stage

Welcome to project noah...this caterpillar is close to turning into a moth...

A friendly welcome to the Project Noah community :)