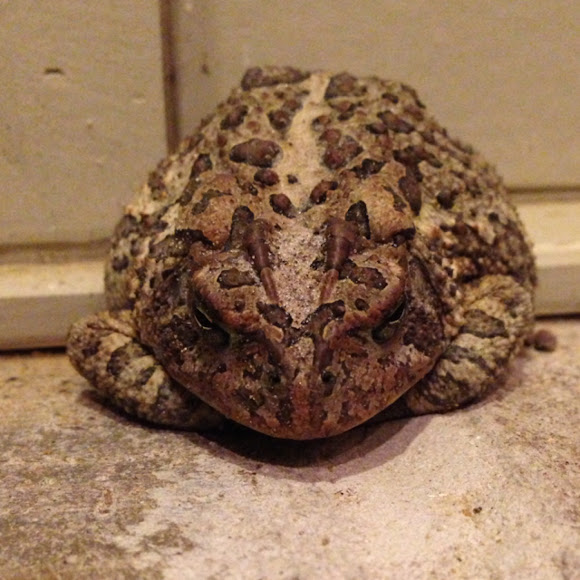 Its coloring is usually brown but can be red, gray, or black. It is approximately 1.7 to 4.5 inches long. The southern toad is characterized by highly pronounced knobs and crests that occur on its head. The two crests run forward from the knobs and come close to one another near the snout. The overall coloring of this toad varies from brown, black, or red. It has no dark spots, and only one or two warts.

The southern toad is common to sandy areas, marshes, and mixed hardwood swamps. Like most toads, the southern toad is most active at night. It hides during the day, most often seeking shelter in burrows that are self-constructed. Southern toads will eat small invertebrates including beetles, earwigs, ants, cockroaches, mole crickets, and snails, but are also known to eat anything they can swallow. Also, this one likes my back porch.

Although it has long been suggested, humans do not get warts from touching toads. However, the material they secrete from the parotoid glands (located at the back of the head, behind the ears) may be irritating to human mucous membranes, but not toxic.

Please put in the scientific name and common name if you agree, otherwise your spotting is still considered unidentified. Thanks :)

The large knobs at the corner of the cranial crests are a dead give away for the Southern Toad.