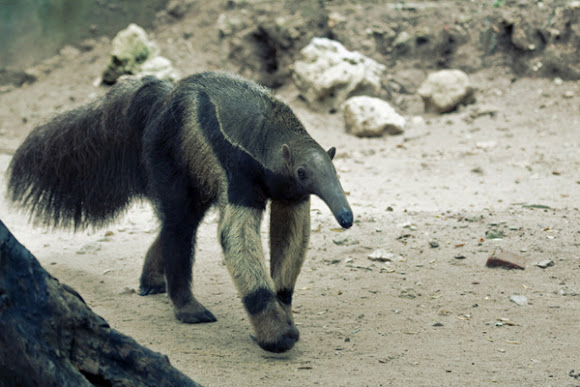 It is a solitary animal found in Honduras to northern Argentina. It feeds mainly on ants and termites, sometimes up to 30,000 insects in a single day. The giant anteater is one of few taxa of mammals without any teeth even in a mature state!

Its found in many habitats, including grasslands, deciduous forests and rain forests in Central and South America.

This giant anteater was photographed at the Barranquilla zoo.

That's a good question! They eat ants, termites, larvae, and some other adult insects, sometimes fruits. So maybe is not only ants what makes them full.

Makes me wonder though ,how does his stomach get full eating ants only?

Makes me wonder though ,how does his stomach get full eating ants only?

It is bizarre, but is extremely beautiful! Have you guys seen his tongue?

make me always laugh...so bizarre (but cute the same time ;))

I tried many times to see these in Brazil and Guyana with no luck.
You have some amazing photos!

Yes! They are amazing, but they can be really dangerous too!

This guy is so awesome!