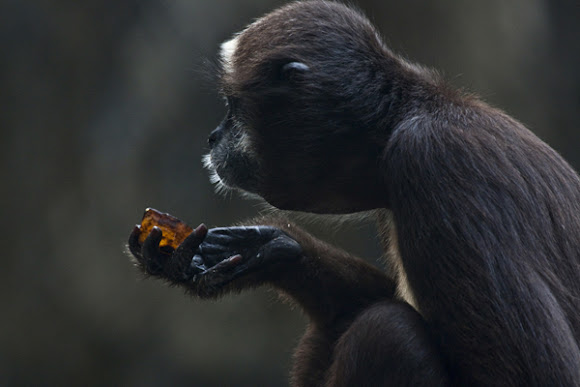 Is a critically endangered species of spider monkey, a type of New World monkey, from northern Colombia and north-western Venezuela. The Brown Spider Monkey is now a highly threatened species, and some populations have already been extirpated. There is ongoing habitat loss within its range, and it has been estimated that 98% of its habitat already is gone. It is also threatened by hunting (in some regions it is the favorite game) and the wild animals trade. The brown spider monkey is among "The World's 25 Most Endangered Primates" (http://www.primate-sg.org/PC24.htm)

This brown spider monkey was photographed at the Barranquilla zoo.

What a wonderful photo!

Thank you so much p.young, that makes me feel I'm doing a good thing for them :)
And Emma, he is holding a wet and wilted leaf.

What is he holding in his hand?

All your photos are so good Carolina. You inspire me!

I just found out the brown spider monkey is also among "The World's 25 Most Endangered Primates" (http://www.primate-sg.org/PC24.htm)

I really don't know how any human being could go out and kill an animal so important to our civilization, so sad.

I really like all your photos, especially this one!

Thank you so much Peter, I try to let people know about them.

This spotting is absolutely incredible. It's threatened status makes the photo that much more powerful.