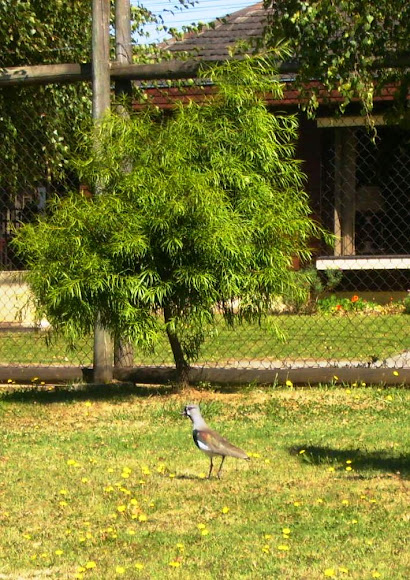 This lapwing is the only crested wader in South America. It is 32 to 38 centimetres (13 to 15 in) in length and weighs approximately 425 grams (15.0 oz). The upperparts are mainly brownish grey, with a bronze glossing on the shoulders. The head is particularly striking; mainly grey with a black forehead and throat patch extending onto the black breast. A white border separates the black of the face from the grey of the head and crest. The rest of the underparts are white, and the eye ring, legs and most of the bill are pink. It is equipped with red bony extensions under the wings (spurs), used to intimidate foes and fight birds of prey. During its slow flapping flight, the Southern Lapwing shows a broad white wing bar separating the grey-brown of the back and wing coverts from the black flight feathers. The rump is white and the tail black. The call is a very loud and harsh keek-keek-keek. There are three or four subspecies, differing slightly in head coloration and voice. Vanellus chilensis fretensis from Patagonia is sometimes included in the nominate subspecies V. c. chilensis. The northern subspecies - V. c. cayennensis from north and V. c. lampronotus from south of the Amazon River - are sometimes separated as a distinct species, Vanellus cayennensis. These two subspecies have a browner head - particularly the northernmost birds - and the white face band (broad in the northern and narrow in the southern one) does not reach to the center of the crown. However, birds from the general region of Uruguay apparently intergrade.