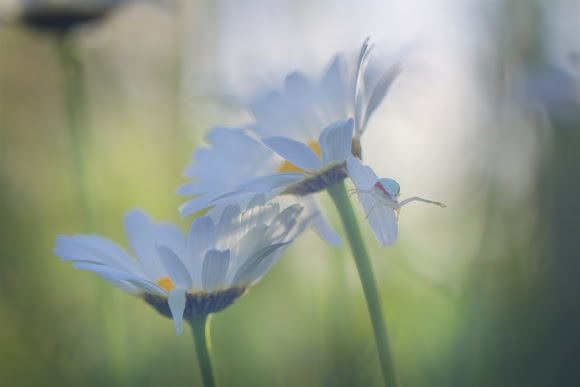 These spiders change color by secreting a liquid yellow pigment into the outer cell layer of the body. On a white base, this pigment is transported into lower layers, so that inner glands, filled with white guanine, become visible. The color similarity between the spider and the flower is well matched with a white flower, in particular the Chaerophyllum temulum, compared to a yellow flower based on the spectral reflectance functions. If the spider dwells longer on a white plant, the yellow pigment is often excreted. It will then take the spider much longer to change to yellow, because it will have to produce the yellow pigment first. The color change is induced by visual feedback; spiders with painted eyes were found to have lost this ability. The color change from white to yellow takes between 10 and 25 days, the reverse about six days.