Hortencia, No me olvides 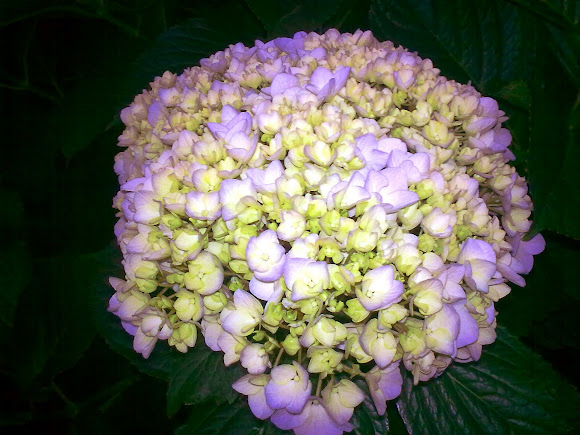 Hydrangea (pronounced /haɪˈdreɪndʒⁱə/, common names Hydrangea and Hortensia) is a genus of about 70 to 75 species of flowering plants native to southern and eastern Asia (China, Japan, Korea, the Himalayas, and Indonesia) and North and South America. By far the greatest species diversity is in eastern Asia, notably China, Japan, and Korea. Most are shrubs 1 to 3 meters tall, but some are small trees, and others lianas reaching up to 30 m by climbing up trees. They can be either deciduous or evergreen, though the widely cultivated temperate species are all deciduous. Having been introduced to the Azores Islands of Portugal, they are now very common there, particularly on Faial Island, which is known as the "blue island" due to the vast number of hydrangeas present on the island, and on Flores Island. Species in the related genus Schizophragma, also in Hydrangeaceae, are also often known as hydrangeas. Schizophragma hydrangeoides and Hydrangea petiolaris are both commonly known as climbing hydrangeas. There are two flower arrangements in hydrangeas. Mophead flowers are large round flowerheads resembling pom-poms or, as the name implies, the head of a mop. In contrast, lacecap flowers bear round, flat flowerheads with a center core of subdued, fertile flowers surrounded by outer rings of showy, sterile flowers. (Wikipedia)