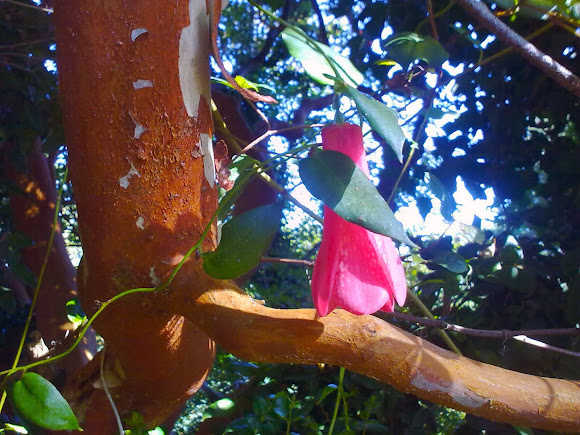 Lapageria rosea, commonly known as the Copihue (co-pee-way < Mapudungun kopiwe)[1] or Chilean Bellflower, is the national flower of Chile. It grows in forests in the southern part of Chile, being part of the Valdivian flora. It is the only species in the genus Lapageria. It is an evergreen climbing plant reaching over 10 m high among shrubs and trees. Leaves are arranged alternately and are evergreen, leathery, lanceolate and feature three to seven prominent parallel veins. The vines twine counterclockwise. The flowers are red spotted with white, there are six thick, waxy tepals; and they are most frequently produced in late summer and fall, although they may be produced at other times. The fruit is an elongate berry with a tough skin containing numerous small seeds about the size of a tomato seed, and are covered in an edible fleshy aril. In the wild the plant is pollinated by hummingbirds. Seed is distributed by birds and other animals. The fruit is colloquially known in Chile as a pepino (cucumber). In the past, the fruit was sold in markets, but the plant has now become rare through over-collection and forest clearance. The name of the fruit in Mapudungun is actually kopiw, which is the etymon of Spanish copihue; the Mapuche call the plant kolkopiw (colcopihue in Spanish, which may also refer to the whole plant). The flower is called kodkülla in the indigenous language.[1] The roots were once collected and used as a substitute for sasparilla. In 1977 The plant was given legal protection in the country of Chile. There are a substantial number of named garden cultivars, mostly developed at one nursery in Chile, with flower colour varying from deep red through pink to pure white (L. rosea 'Albiflora'), and some with variegated flowers. In cultivation, to obtain fruit it is generally necessary to pollinate by hand if there are not native hummingbirds. Some cultivars are self-fruitful, but better pollination is achieved with differing parents. Germination is best with fresh moist seed; dried seeds take special treatment and have a much poorer germination rate. Propagation of cultivars is by cuttings (usually rooted under mist), layering, or division. Seedlings take from three to ten years to flower. Cuttings usually flower more quickly. Lapageria rosea is related to Philesia magellanica (syn. P. buxifolia), another plant from the Valdivian flora, closely related to L. rosea, having similar flowers, but is a shrubby plant bearing some similarity to a heath. ×Philageria veitchii is a hybrid between L. rosea and P. magellanica. It is more similar in appearance to the former.