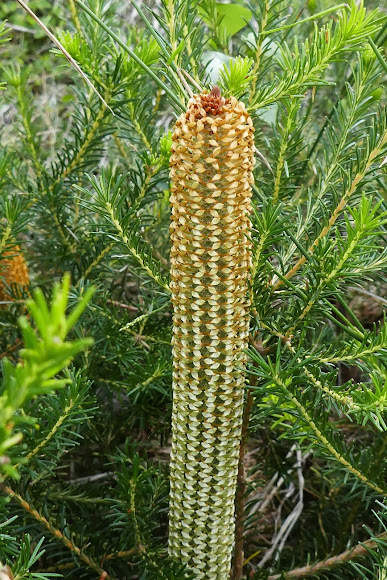 Banksia ericifolia, commonly known as the "heath-leaved banksia", is a species of woody shrub of the family Proteaceae, and is native to Australia. This is an impressive banksia species, of which there are two subspecies - B. e. ericifolia (Sydney region) and B. e. macrantha (Far North Coast). It is a medium to large shrub that can reach 6 m (20 ft) high and wide, although in coastal or mountain heathlands, height might only reach a couple of metres. Flowering is in autumn, or in winter in cooler areas. The spikes are red or gold in overall colour, with styles golden, orange, orange-red or burgundy. Some unusual forms have striking red styles on a whitish perianth. Very occasionally, forms with all yellow inflorescences are seen. PS: Here's a spotting I made of a plant in full bloom, also on the Central Coast.... https://www.projectnoah.org/spottings/21...

Chiefly occurs in soils of sandy loam, deep sand, or sand over sandstone in well drained areas. This spotting was in a very exposed location, in full sun, salt air, high winds. Coastal heath on the cliffs of Bouddi National Park on the NSW Central Coast. The subspecies is distributed widely in the Sydney region, north to the Central Coast, Jervis Bay to the south, and up towards the Blue Mountains in the west.

Plant species on the Bouddi Peninsula, of which there are two species of banksia listed here.... http://www.killcarewagstaffetrust.org.au... Fun fact - Banksia ericifolia was one of the original banksia species collected by Joseph Banks around Botany Bay in 1770.

I've always had such a fascination with banksias - they are so amazing. Thanks, Tukup.