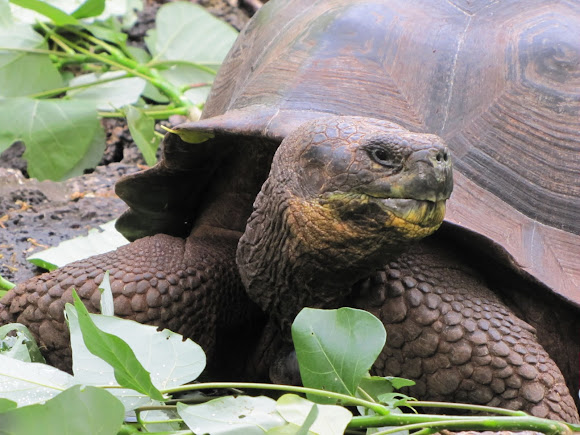 The largest living species of tortoise, reaching weights of over 400 kg (880 lb) and lengths of over 1.8 meters (6 ft). With life spans in the wild of over 100 years, it is one of the longest lived vertebrates. A captive individual lived at least 170 years. Shell size and shape vary between populations. On islands with humid highlands, the tortoises are larger, with domed shells and short necks. On islands with dry lowlands, the tortoises are smaller, with 'saddleback' shells and long necks. These island to island differences played a role in the inception of Charles Darwin's theory of evolution.

The tortoise is native to seven of the Galápagos Islands, a volcanic archipelago about 1,000 km (620 mi) west of Ecuador. Spanish explorers who discovered the islands in the 16th century named them after the Spanish "galápago", meaning tortoise.