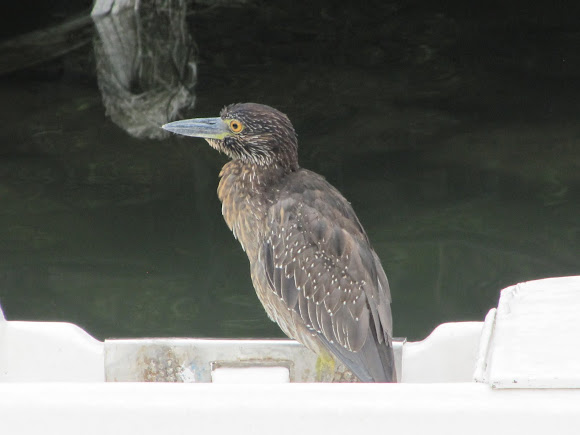 Also called the American Night Heron or squawk, is a fairly small heron, similar in appearance to the Black-crowned Night Heron. Adults are about 61 cm long and weigh 625 g. They have a white crown and back with the remainder of the body grayish, red eyes and short yellow legs. They have a white stripe below the eye. Juveniles resemble young Black-crowned Night-Herons, being mainly brown flecked with white or gray. Their breeding habitat is swamps and marshes from the eastern United States to north-eastern South America. They often nest in colonies, usually on platforms of sticks in trees or shrubs . they lay 3–5 pale blue-green eggs.

It is found throughout a large part of the Americas, especially (but not exclusively) in warmer coastal regions; an example occurrence is the Petenes mangroves of the Yucatan. In warmer locations, some are permanent residents; others migrate to Central America and the West Indies. They may occasionally wander north to the lower Great Lakes or Ontario after the breeding season.