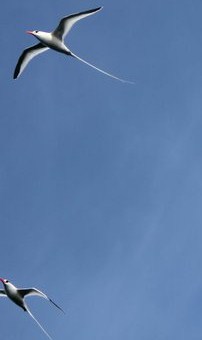 The adult is a slender, mainly white bird, 48 cm long, excluding the central tail feathers which double the total length, and a one metre wingspan. The long wings have black markings on the flight feathers. There is black through the eye. The bill is red. Sexes are similar, although males average longer tails. Juveniles lack the tail streamers, are greyer-backed, and have a yellow bill. P. a. indicus has a reduced black eye stripe, and a more orange-tinted bill.

Occurs in the tropical Atlantic, eastern Pacific and Indian Oceans. The Indian Ocean race, P. a. indicus, was at one time considered a full species, the Lesser Red-billed Tropicbird from Pakistan and western India. It breeds on tropical islands laying a single egg directly onto the ground or a cliff ledge. It disperses widely when not breeding, and sometimes wanders far, including an amazing record from Great Britain. One has recently been found in eastern Nova Scotia, Canada and another sighting was confirmed on Lord Howe Island near Australia in November 2010. They feed on fish and squid, but are poor swimmers.