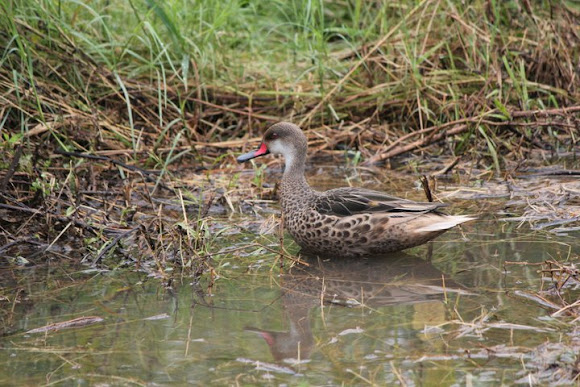 This species was first described by Linnaeus in his Systema naturae in 1758 under its current scientific name. There are three subspecies: A. b. bahamensis in the Caribbean, and a vagrant in south Florida. A. b. galapagensis on the Galapagos, and the slightly larger A. b. rubirostris in South America. The latter race may be partially migratory, breeding in Argentina and wintering further north. Like many southern ducks, the sexes are similar. It is mainly brown with white cheeks and a red-based grey bill (young birds lack the pink). It cannot be confused with any other duck in its range.

A dabbling duck of the Caribbean, South America, and the Galápagos Islands. This species occurs on waters with a degree of salinity, such as brackish lakes, estuaries and mangrove swamps