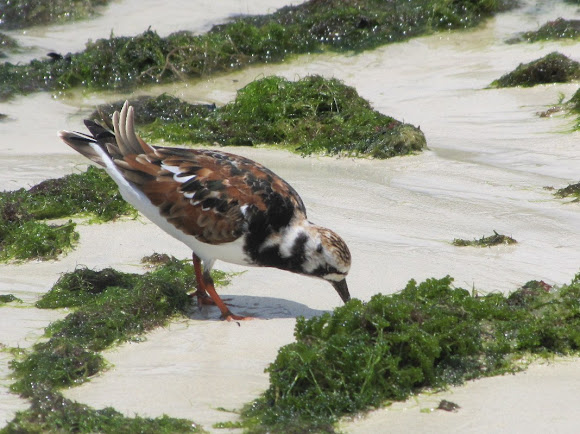 It is a fairly small and stocky bird, 22–24 centimetres (8.7–9.4 in) long with a wingspan of 50–57 centimetres (20–22 in) and a weight of 85-150 grams. The dark, wedge-shaped bill is 2–2.5 centimetres (0.79–0.98 in) long and slightly upturned. The legs are fairly short at 3.5 centimetres (1.4 in) and are bright orange. At all seasons, the plumage is dominated by a harlequin-like pattern of black and white. Breeding birds have reddish-brown upper parts with black markings. The head is mainly white with black streaks on the crown and a black pattern on the face. The breast is mainly black apart from a white patch on the sides. The rest of the underparts are white. In flight it reveals a white wingbar, white patch near the base of the wing and white lower back, rump and tail with dark bands on the uppertail-coverts and near the tip of the tail. The female is slightly duller than the male and has a browner head with more streaking. Non-breeding adults are duller than breeding birds and have dark grey-brown upperparts with black mottling and a dark head with little white. Juvenile birds have a pale brown head and pale fringes to the upperpart feathers creating a scaly impression.

It breeds in northern latitudes, usually no more than a few kilometres from the sea. The subspecies A. i. morinella occurs in northern Alaska and in Arctic Canada as far east as Baffin Island. A. i. interpres breeds in western Alaska, Ellesmere Island, Greenland, Norway, Denmark, Sweden , Finland, Estonia and northern Russia. It formerly bred on the Baltic coast of Germany and has possibly bred in Scotland and the Faroe Islands. In the Americas, the species winters on coastlines from Washington and Massachusetts southwards to the southern tip of South America although it is scarce in southern parts of Chile and Argentina and is only an unconfirmed vagrant in the Falkland Islands. In Europe it winters in western regions from Iceland, Norway and Denmark southwards. Only small numbers are found on Mediterranean coasts. In Africa it is common all the way down to South Africa with good numbers on many offshore islands. In Asia it is widespread in the south with birds wintering as far north as southern China and Japan (mainly in the Ryukyu Islands). It occurs south to Tasmania and New Zealand and is present on many Pacific islands. Some non-breeding birds remain year round in many parts of the wintering range, with some of those birds still taking on breeding plumage in the spring and summer.