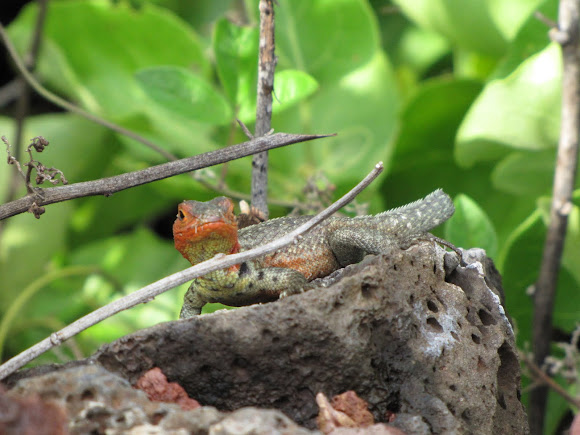 Males and females of all Tropidurus species are marked differently. The male is usually much larger than the female, and its body is more brightly coloured and distinctly patterned. The average size of lizards varies greatly from habitat to habitat as does the pattern of body markings. Markings vary considerably, even among individuals of the same species. Like many lizards, they show changes of colour with mood and temperature. Members of the same species occurring in different habitats aiso show colour differences. Thus animals living mainly on dark lava are darker than ones which live in lighter, sandy environments.

The reptile genus Tropidurus includes several species of ground lizard. There are at least 28 described species, including seven which are endemic to the Galapagos Islands. These seven species are collectively known as lava lizards, although these commonly are placed in the genus Microlophus instead. The distribution of these lizards and their variations in shape, colour and behaviour show the phenomenon of adaptive radiation so typical of the inhabitants of this archipelago. One species occurs on all the central and western islands, which were perhaps connected during periods of lower sea levels, while one species each occurs on six other more peripheral islands. All have most likely evolved from a single ancestral species. Other Tropidurus species are found on the South American mainland, especially in the Amazon Rainforest.