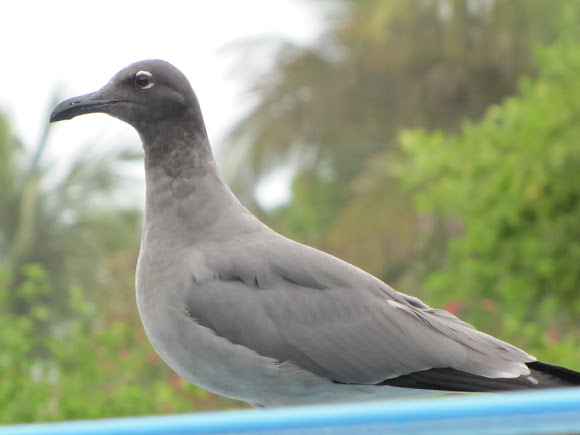 One of the rarest gulls in the world, the entire population lives on the Galapagos Islands and is estimated at 400 pairs. The adult plumage, acquired in the third year of life, consists of a black head, black wings, and with a dark gray body and a paler gray belly. The bill and legs are black, and the inside of the mouth is scarlet. They have white upper and lower eyebrows, with red lids. Immature gulls are generally dark brown. Lava Gulls are solitary nesters, laying two olive-colored and well-camouflaged eggs that take 30 days to incubate. Young birds fledge at 60 days and are cared for by adults for a short period. They are omnivores like most gulls, generally scavenging or stealing from nests, but will also catch fish, small crustaceans, and newly-hatched lizards. The Lava Gull is categorized as "vulnerable" by the IUCN Red List because it exists in small numbers and though the population is stable, it faces numerous threats.

Thanks for all the information and the good picture!