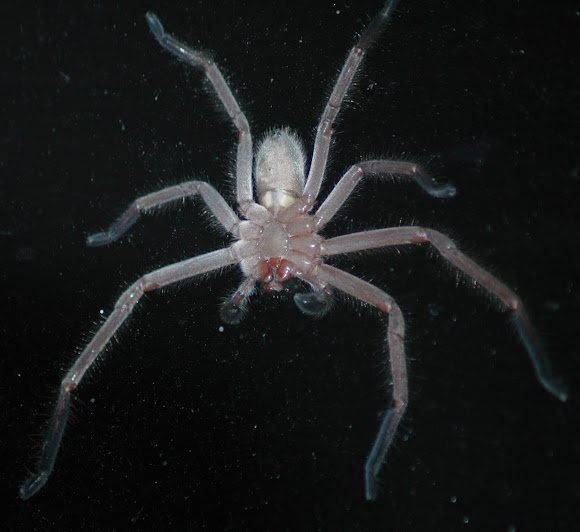 A large long-limbed spider. Huntsman spiders are so named because rather than building a web or a trap they run down their prey. They are exceptionally quick moving and use their long front legs to pull their prey into their large palps.

Fairly universal in Australia where they can be found under tree bark, in houses and cars, and just about anywhere else they can sequester themselves.

This one was hunting on the outside of our sliding glass door. We frequently see them on our windows in the evening, as they seem to have learned that the moths are attracted to the light from inside and they simply wait for one to alight near them.

It's a crappy video in very low light, but here's a short bit of video I got of one one awhile back: http://www.youtube.com/watch?v=QP7U7eCDb...

Ha yeah. I mean--while I think it's cool, I'm definitely glad it's not sitting beside me.

Thanks. They are one of the few critters that actually make me a bit fearful, not because they are harmful, but because their shape is so different from other spiders, they're so big, and especially because they are so darn fast. Oh, and they like to live in my car.