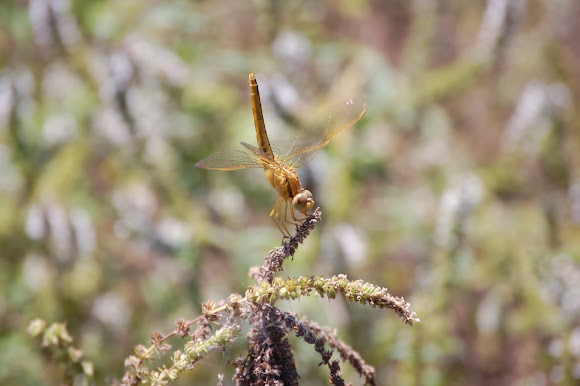 Dragonfly is the common name for any insect belonging to the infraorder (or suborder) Anisoptera of the order Odonata, characterized by an elongated body, large multifaceted eyes, and two pairs of strong transparent wings, which at rest are typically held out to the side or out and downward. In a broader sense, "dragonfly" is used to designate any insect in Epiprocata (Bechly 1996), which is a relatively new suborder that was created and subsumes as an infraorder of the previous suborder Anisoptera, the "true dragonflies." Dragonflies provide important values for the ecosystem and for humans. Ecologically, they are key to food chains, and as voracious aquatic predators, and also as terrestrial predators, and so help to control insect populations. They also serve as indicators of ecosystem quality. For humans, they add to the wonder of nature, and even are a minor food source in some cultures. Although generally fairly similar, dragonflies differ from damselflies (suborder Zygotpera) in several, easily recognizable traits. Dragonflies have fairly robust bodies, are strong fliers, and at rest hold their wings either out to the side or out and downward (or even somewhat forward). Damselflies tend to be less robust, even appearing rather weak in flight, and when at rest hold their wings either folded together back above the abdomen or held slightly open above (such as in the family Lestidae). Also, the hind wing of the dragonfly broadens near the base, caudal to the connecting point at the body, while the hind wing of the damselfly is essentially similar to the fore wing. Dragonfly eyes typically occupy much of the animal's head, touching (or nearly touching) each other across the face, with notable exceptions. In damselflies, there is typically a gap between the eyes.