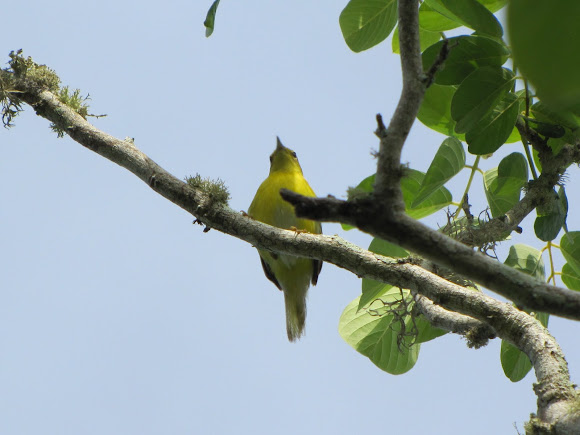 Dendroica petechia is a New World warbler species or superspecies; the subspecies group around D. (p.) aestiva is increasingly treated as good species. Dendroica aestiva (Yellow Warbler) again. The name for the entire cryptic species complex is Mangrove Warbler, and another group of subspecies is known as Golden Warbler. Sensu lato, they make up the most widespread Dendroica species, breeding in almost the whole of North America and down to northern South America. Other than in male breeding plumage, all subspecies are very similar. Winter, female and immature birds all have similarly greenish-yellow uppersides and are a duller yellow below. Young males soon acquire breast and, where appropriate, head coloration. Females are somewhat duller, most notably on the head. In all, the remiges and rectrices are blackish olive with yellow edges, sometimes appearing as an indistinct wing-band on the former. The eyes and the short thin beak are dark, while the feet are lighter or darker olive-buff.