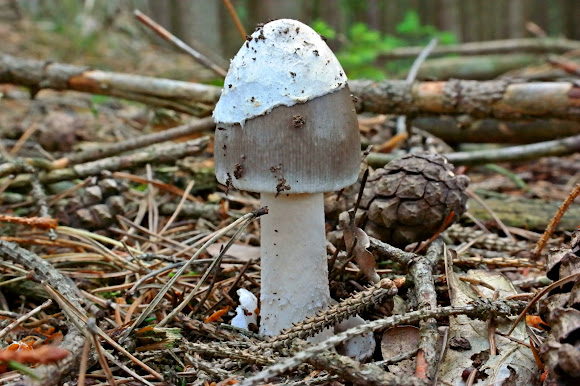 The cap is 3 to 10 centimetres (1.2 to 3.9 in) in diameter and gray to grayish-brown in color; initially the cap is oval, then as it matures it becomes progressively conical, convex, and eventually flattened, sometimes with a small umbo (a rounded elevation in the center of the cap). The gills are white, free (not attached to the stem) to narrowly attached, moderately crowded together, and sometimes have a grayish tint; the lamellulae (small gills that run from the edge of the cap towards the stem) are truncate.The flesh is white and thin, and does not change color upon bruising or injury. The stem is 8 to 22 centimetres (3.1 to 8.7 in) long and 1 to 2 centimetres (0.4 to 0.8 in) thick. Unlike many other Amanitas with stems that are swollen at the base (bulbous), the thickness of the A. vaginata stem is roughly the same at both ends. The stem surface is covered with a finely powdered bloom (pruinose), especially near the top; faint longitudinal lines may be seen. The base of the stem is enclosed in a loose, sack-like volva that may discolor grayish or reddish brown. The spore print is white.

A mycorrhizal species, Amanita vaginata grows singly or numerous in both coniferous and hardwood forests. It has also been noted to occur frequently in grassy areas at the edge of forests, unkempt lawns, and suburban area where the ground has been recently disturbed.

Amanita vaginata, commonly known as the grisette, is an edible mushroom in the Amanitaceae family of fungi. Unlike many other Amanita mushrooms, A. vaginata lacks a ring on the stem.