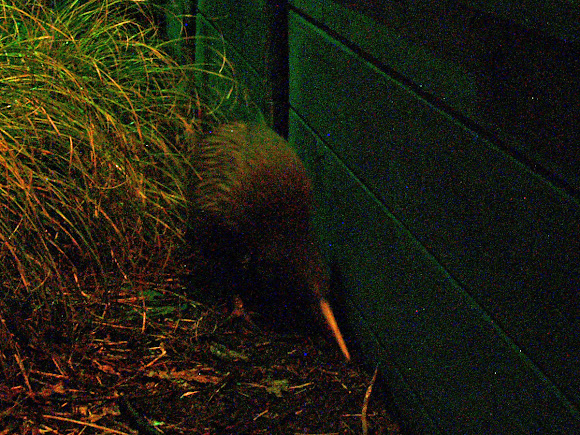 These birds are hand-reared from eggs taken from the wild, placed in enclosed pens like the one here until they are large enough to be able to defend themselves agains predators, and then released back into the wild. This gives them a much better chance of survival than those left in the nest. Earlier in the day we were lucky enough to see one which had hatched just a few moments before. I waited in the pen for a couple of hours near a shaft of light which this bird ran through about every ten minutes or so. Exposure time was 2 seconds at asa400 and I still had to do a lot of lightening in photoshop to bring out the details. There were other Kiwis seen (vaguely) in other pens but insufficient light, the pictures had no detail at all.

The following data is from the Clements listing, v6.6

As you can see there are two sub-species of the Southern Brown Kiwi and 2 other full species of Brown Kiwi, the Okarito and the North Island. This was not clear in the book used for the original spotting, so it could be any one of those four. Perhaps only the staff at that centre 5 years ago would know for certain which one it actually is.

Very nice spotting Malcolm; I thought I was going to find more pictures of kiwis but this is the only one; very sad to hear it is an endangered species, didn´t know. According to wikipedia: "There are five recognised species, two of which are currently vulnerable, one of which is endangered, and one of which is critically endangered"; hopefully new zealaner´s and ALL of us may revert the situation...Greetings

My main impression of Kiwis is the sound of them sniffing for insects in the leaf litter.

You got your comment in before I even posted it!!!

The Kiwi is endemic to New Zealand and is endangered.