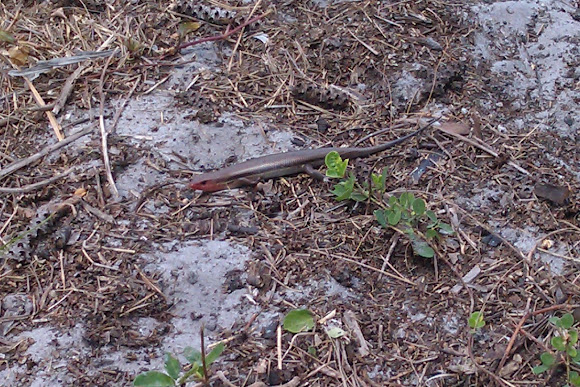 The broad-headed skink gets its name from the wide jaws, giving the head a triangular appearance. Adult males are brown or olive brown in color and have bright orange heads during the mating season in spring. Females have five light stripes running down the back and the tail, similar to the Five-lined Skink. Juveniles are dark brown or black and also striped and have blue tails. Females typically are larger than males. Hatchlings have a total length of 6 centimetres (2.4 in) to 8 centimetres (3.1 in). Adult broad-headed skinks can grow to about 13 inches in length.

Broad-headed skinks are widely distributed in the south-eastern states of the U.S., from the East Coast to Kansas and eastern Texas and from Ohio to the Gulf Coast. These skinks are the most arboreal of the North American Eumeces. Although they do occur in urban areas, their preferred habitat are humid forest areas with abundant leaf litter, especially oak forests. They forage on the ground, but also easily and often climb trees for shelter or sleep or searching for food.

Snapped these pictures while interning at FLREC extension of IFAS in Davie, Florida. I must have startled it because it fell from a tree as I past it on my golf cart. This photo was taken on PRIVATE PROPERTY!