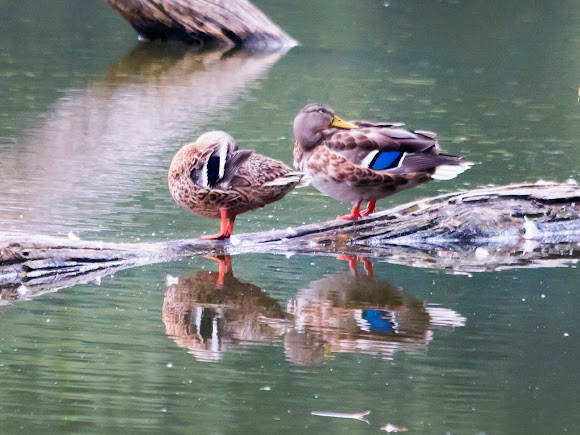 a dabbling duck that breeds throughout the temperate and subtropical Americas, Eurasia, and North Africa, and has been introduced to New Zealand, Australia, Peru, Brazil, Uruguay, Argentina, Chile, Colombia, the Falkland Islands, and South Africa. This duck belongs to the subfamily Anatinae of the waterfowl family Anatidae. The male birds (drakes) have a glossy green head and are grey on their wings and belly, while the females (hens or ducks) have mainly brown-speckled plumage. Both sexes have an area of white-bordered black or iridescent blue feathers called a speculum on their wings; males especially tend to have blue speculum feathers. The mallard is 50–65 cm (20–26 in) long, of which the body makes up around two-thirds the length. The wingspan is 81–98 cm (32–39 in) and the bill is 4.4 to 6.1 cm (1.7 to 2.4 in) long. It is often slightly heavier than most other dabbling ducks, weighing 0.7–1.6 kg (1.5–3.5 lb). Mallards live in wetlands, eat water plants and small animals, and are social animals preferring to congregate in groups or flocks of varying sizes. This species is the main ancestor of most breeds of domestic ducks. The mallard is a medium-sized waterfowl species that is often slightly heavier than most other dabbling ducks. It is 50–65 cm (20–26 in) long – of which the body makes up around two-thirds – has a wingspan of 81–98 cm (32–39 in),[ and weighs 0.7–1.6 kg (1.5–3.5 lb). Among standard measurements, the wing chord is 25.7 to 30.6 cm (10.1 to 12.0 in), the bill is 4.4 to 6.1 cm (1.7 to 2.4 in), and the tarsus is 4.1 to 4.8 cm (1.6 to 1.9 in). The breeding male mallard is unmistakable, with a glossy bottle-green head and a white collar that demarcates the head from the purple-tinged brown breast, grey-brown wings, and a pale grey belly. The rear of the male is black, with white-bordered dark tail feathers. The bill of the male is a yellowish-orange tipped with black, with that of the female generally darker and ranging from black to mottled orange and brown. The female mallard is predominantly mottled, with each individual feather showing sharp contrast from buff to very dark brown, a coloration shared by most female dabbling ducks, and has buff cheeks, eyebrow, throat, and neck, with a darker crown and eye-stripe. Both male and female mallards have distinct iridescent purple-blue speculum feathers edged with white, which are prominent in flight or at rest but temporarily shed during the annual summer moult. Upon hatching, the plumage of the duckling is yellow on the underside and face (with streaks by the eyes) and black on the back (with some yellow spots) all the way to the top and back of the head. Its legs and bill are also black. As it nears a month in age, the duckling's plumage starts becoming drab, looking more like the female, though more streaked, and its legs lose their dark grey colouring. Two months after hatching, the fledgling period has ended, and the duckling is now a juvenile. Between three and four months of age, the juvenile can finally begin flying, as its wings are fully developed for flight (which can be confirmed by the sight of purple speculum feathers). Its bill soon loses its dark grey colouring, and its sex can finally be distinguished visually by three factors: 1) the bill is yellow in males, but black and orange in females; 2) the breast feathers are reddish-brown in males, but brown in females; and 3) in males, the centre tail feather (drake feather) is curled, but in females, the centre tail feather is straight. During the final period of maturity leading up to adulthood (6–10 months of age), the plumage of female juveniles remains the same while the plumage of male juveniles gradually changes to its characteristic colours. This change in plumage also applies to adult mallard males when they transition in and out of their non-breeding eclipse plumage at the beginning and the end of the summer moulting period. The adulthood age for mallards is fourteen months, and the average life expectancy is three years, but they can live to twenty.

5 ducks spotted together: 2 in photos 1-3, and 3 more in photo 4. Photo 5 has the three from photo 4, plus one of the two from the first set of three (far left). same species spotted in same location one month earlier here (not sure if same flock or not): https://www.projectnoah.org/spottings/29...