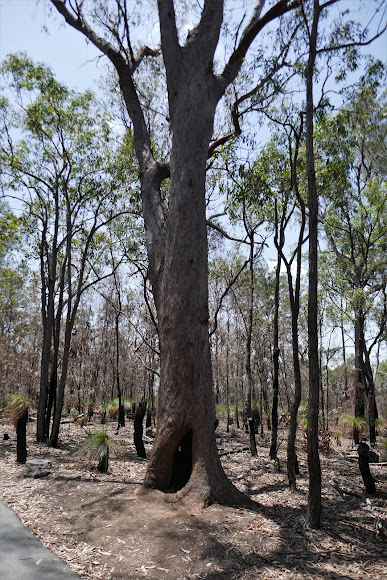 Tallowwood is a species of medium to tall eucalyptus tree that is endemic to eastern Australia, and belongs to the family Myrtaceae. It typically grows to a height of 60 metres (200 feet), although larger specimens have been recorded up to 75 metres, and trees can live up to 800 years. This is a primary food tree species in Toohey Forest for koalas, as well as possums, birds and insects. One characteristic I look for to ID this species is its bark, which is fibrous and stringy, grey on the surface but reddish-brown to yellow underneath. Broken bark is an indication that something has climbed it, usually a goanna or koala. This is a hardwood species favoured by the building and construction industry. The timber is naturally oily with a high tannin content and is highly used for decking and, recently, garden furniture. The colour is a distinct yellowish brown to olive-green. The tree in this spotting is also a valuable habitat tree. Note the large trunk opening and hollow, plus the hollows in the upper branches. Great homes for birds and mammals. PS: The following video shows a very impressive tallowwood specimen - https://www.youtube.com/watch?v=i0WOr9-Y...

Toohey Forest is a remnant eucalyptus woodland reserve of approximately 655 hectares. The forest is situated within an urban area on the south side of Brisbane, within the city limits. Tallowwood is one of a number of eucalypt species that are common in this reserve. It usually grows in tall open forest on fertile soil on slopes and ridges and in valleys. Mostly coastal, it occurs along the NSW Central Coast, and as far north as Fraser Island in southern Queensland. I've also seen tallowwood in Sydney, although I don't think it's endemic there.

There are several favourite food tree species for koalas in Toohey Forest, but their preference for certain trees will vary over time and season. Tallowwood (Eucalyptus microcorys) and grey gum (Eucalyptus sp.) are current favourites, but they are also known to eat leaves from the spotted gum (Corymbia sp.), although spotted gum isn't being eaten at present, most likely due to conditions being so dry and perhaps less moisture in the leaves than in other species.