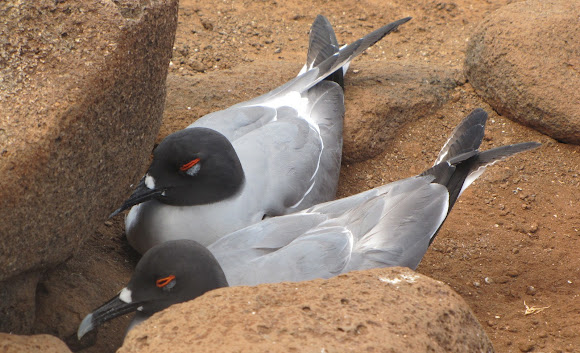 No structural or plumage differences between the male and female. In the breeding season, the adult has a black plumaged head and a bright red fleshy rim around each eye. Outside the breeding season, the head is white and the eye rim becomes black.[5] It has a grayish upper breast, gray mantle, and black wingtips. The mostly black bill has a contrasting white tip.

The Swallow-tailed Gull is a near-endemic breeding bird of the Galápagos Islands, although a few pairs nest on Malpelo Island off the coast of Colombia. When not breeding, it is totally pelagic, flying and hunting over the open oceans, and migrating eastward to the coasts of Ecuador and Peru.

Those are beautiful birds.