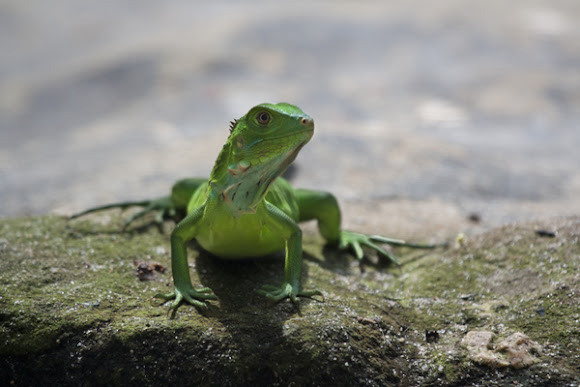 Its a large, arboreal herbivorous species of lizard of the genus Iguana native to Central and South America. Green Iguanas use "head bobs" and dewlaps in a variety of ways in social interactions, such as greeting another iguana or to court a possible mate. The frequency and number of head bobs have particular meanings to other iguanas. Also when frightened by a predator and If threat persists the iguana can lash with its tail, bite and use its claws in defense. (I once saw an iguana lashing my dogs with it tail, they were bothering her). They also are victims of the illegal pet trade.

From southern Brazil and Paraguay to as far north as Mexico and the Caribbean Islands; and in the United States in South Florida (including the Florida Keys) and the Rio Grande Valley of Texas they considered an invasive species.

I know! I have always wanted to know what he has doing in the second picture...

He looks like he is posing! What a cutie!

what a beautiful 4th shot....both 1st and 2nd have an awesome green...the 2nd has got the funnier pose, though :D great shots - all of them

I know! I still don't know why some adults become orange or gray.