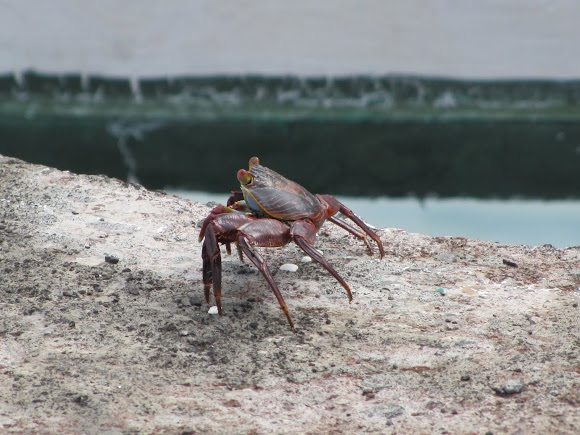 G. grapsus is a typically-shaped crab, with five pairs of legs, the front two bearing small, blocky, symmetrical chelae. The other legs are broad and flat, with only the tips touching the substrate. The crab's round, flat carapace is just over 8 cm (3 inches) in length. Young G. grapsus are black or dark brown in color and camouflage well on the black lava coasts of volcanic islands. Adults are quite variable in color. Some are muted brownish-red, some mottled or spotted brown, pink, or yellow. The ones seen on photographs of tropical island fauna are often bright orange or red with stripes or spots dorsally, blue and green ventrally, and sporting red claws and pink or blue eyes.

One of the most common crabs along the western coast of South America. It can also be seen along the entire Pacific coast of Central America and Mexico, and nearby islands. It is one of the many charismatic species that inhabits the Galápagos Islands, and is often seen in photos of the archipelago, sometimes sharing the seaside rocks with the marine iguanas. This crab lives amongst the rocks at the often turbulent, windy shore, just above the limit of the seaspray. It feeds on algae primarily, sometimes sampling plant matter and dead animals. It is a quick-moving and agile crab, and hard to catch, but not considered very edible by humans. It is used as bait by fishermen.