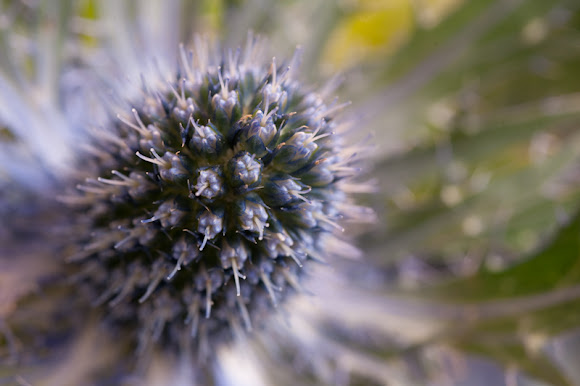 Eryngium is a genus in the family Apiaceae of about 230 species of annuals and perennials with hairless and usually spiny leaves, and dome-shaped umbels of flowers resembling those of thistles. The genus has a cosmopolitan distribution, with the centre of diversity in South America. Some species are native to rocky and coastal areas, but the majority are grassland plants. Common names include Sea-holly and Eryngo, the former typically being applied to coastal species, and the latter to grassland species.

Check out the Erynjium genus rather than Carduus, although there are a couple of hundred different species in this genus. Common name is Sea Holly

That is really different! Neat. It looks like it has tiny blooms.