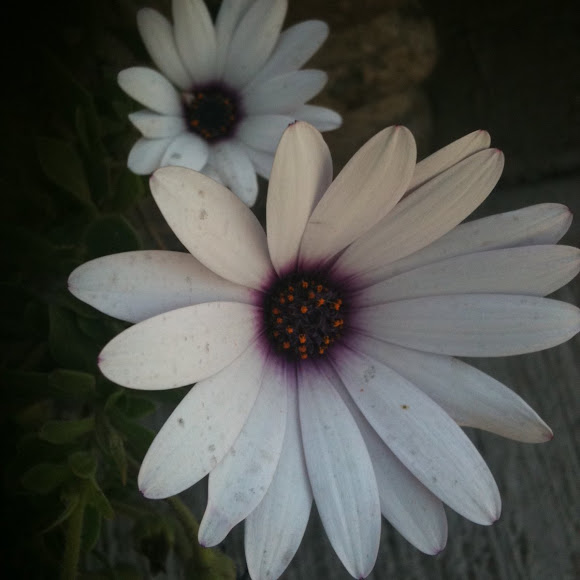 There are about 50 species, native to Africa, 35 species in southern Africa, and southwestern Arabia. They are half-hardy perennials or subshrubs. Therefore they do not survive outdoor wintry conditions, but there is still a wide range of hardiness. Their alternate (rarely opposite) leaves are green, but some variegated forms exist. The leaf form is lanceolate. The leaf margin is entire, but hardy types are toothed. The daisy-like flowers consists of disc florets and ray florets, growing solitary at the end of branches or sometimes in inflorescences of terminal corymbose cymes. The disc florets are pseudo-bisexual and come in several colors such as blue, yellow and purple. The hardy types usually show a dark blue center in the disc until the yellow pollen is shed. The ray florets are female and are found diverse colors such as white, cream, pink, purple, mauve to yellow. Some cultivars have "spooned" petals such as "Pink Whirls". Many species flower a second time late summer, stimulated by the cooler night temperatures. Hardy types show profuse flowering in the spring, but they do not get a second flush of flowers. Most widely sold cultivars are grown as annuals and are mainly hybrids of O. jucundum, O. ecklonis and O. grandiflorum and can be hardy to -2°C (30°F). If hardy, they can be grown as perennials or as shrubs.

Thank you! We found some other pictures in Wikipedia.