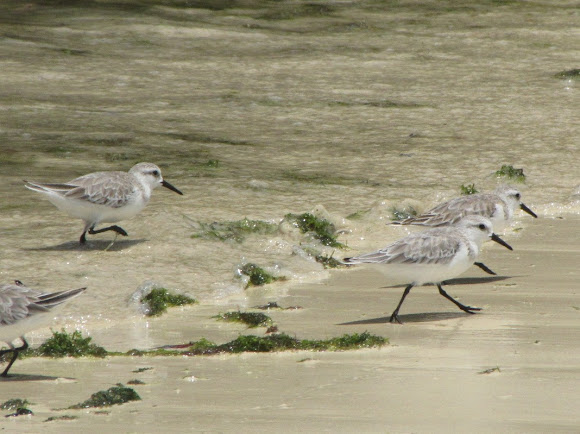 The Sanderling is a small plump sandpiper, 18–20 cm in length. Its weight ranges from 40-100 g. The winter bird is very pale, almost white apart from a dark shoulder patch. This is the source of the specific name, alba, which is the Latin for "white". Later in the summer, the face and throat become brick-red. The juvenile bird is spangled black and white, and shows much more contrast than the adult. Sanderling behavior is distinctive, but visually, if the size is misjudged, a breeding plumage sanderling can be mistaken for some varieties of stint, or a winter plumage sanderling can be mistaken for a Dunlin or Red Knot. It can be told from other small wading birds, given good views, by its lack of a hind toe.

The Sanderling breeds in the High Arctic areas of North America, Europe and Asia. In North America it breeds in the Canadian Arctic Archipelago, Nunavut, Greenland (and to a lesser extent Alaska), in Eurasia it breeds Spitsbergen, and areas of northern Russia from the Taymyr Peninsula to the New Siberian Islands. In the northern winter it has a nearly cosmopolitan distribution across the world's marine coasts. It is a complete migrant, travelling between 3,000 to 10,000 km from its breeding grounds to its wintering sites. Birds that travel further also arrive later and leave sooner. The majority of adults leave the breeding grounds in July and early August, whereas juvenile birds leave in late August and early September. The northward migration begins in March at the southern end of their winter distribution. The breeding habitat of the Sanderling is coastal tundra north of 5 °C July isotherm. The species typically chooses nesting sites on dry stony areas near wet areas, from 60 m above sea level to 800 m. During the winter and its migration it is most commonly found on coastal sandy beaches, but also occurs on tidal sand flats mud flats and the shores of lakes and rivers. More infrequently it make occur on rocky shores.