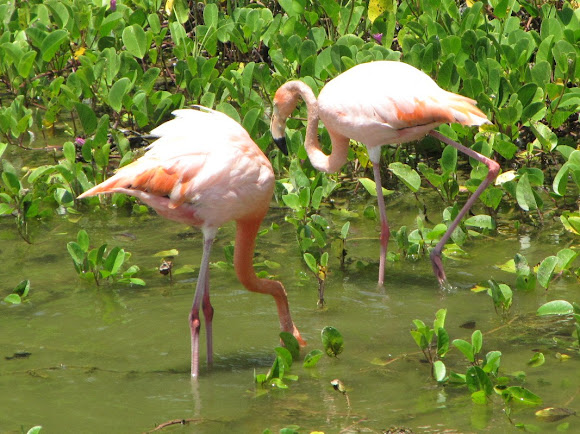 Like all flamingos, it lays a single chalky white egg on a mud mound, between May and August; incubation until hatching takes from 28 to 32 days; both parents brood the young for a period of up to 6 years when they reach sexual maturity. Their life expectancy of 40 years is one of the longest in birds. The American Flamingo is 120–140 cm (47–55 in) in length; males weigh 2.8 kg (6.2 lb) and females 2.2 kg (4.9 lb) kg. Most of its plumage is pink, giving rise to its earlier name of Rosy Flamingo and differentiating adults from the much paler Greater Flamingo. The wing coverts are red, and the primary and secondary flight feathers are black. It is the only flamingo which naturally inhabits North America. The bill is pink and white with a restricted black tip, and the legs are entirely pink. The call is a goose-like honking.

Breeds in the Galápagos Islands, coastal Colombia, Venezuela and nearby islands, besides the Guyanas and Cape Orange in Brazil. It also breeds in the Yucatán Peninsula of Mexico, and in the northern Caribbean in the Bahamas, Hispaniola, Cuba and the Turks and Caicos Islands. Most sightings in southern Florida are usually considered to be escapees, although at least one bird banded as a chick in the Yucatán Peninsula has been sighted in Everglades National Park, and others may be wanderers from Cuba. Its preferred habitats are similar to that of its relatives: saline lagoons, mudflats, and shallow brackish coastal or inland lakes.