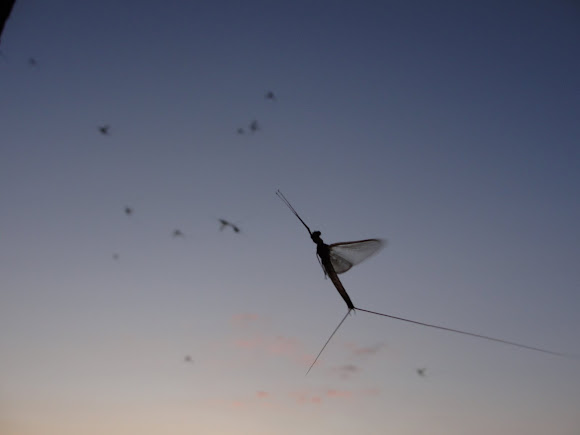 "Mayflies are insects which belong to the Order Ephemeroptera (from the Greek ephemeros = "short-lived", pteron = "wing", referring to the brief lifespan of adults). They have been placed into an ancient group of insects termed the Palaeoptera, which also contains dragonflies and damselflies. They are aquatic insects whose immature stage (called naiad or, colloquially, nymph) usually lasts one year in freshwater. The adults are short-lived, from a few minutes to a few days depending on the species. About 2,500 species are known worldwide, including about 630 species in North America. Common names for mayflies include "dayfly", "shadfly", "Green Bay flies", "lake fly", "fishfly"(commonly called this in Great lakes Region),[2] "midgee", and "jinx fly"."

A favorite food of trout, substituted by this as one form: http://ny-image3.etsy.com/il_fullxfull.2...