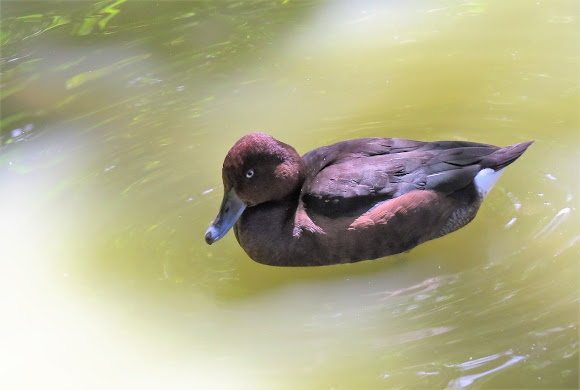 Medium sized (approx 40cm in length) eurasian diving duck, various shades of chestnut and brown predominant. Breeding male is rich chestnut; darkest on back and palest on flanks - with white undertail (and belly, but belly is not shown in these pics). Female all brown, but less rich colors, duller. Male has white eye, female dark.

Shallow wetlands - here observed in and around a Bird Park Villars les Dombes, in a marshy area of Dombes; France.

The interesting thing about this duck in Dombes is that the Ferruginous duck was a resident in that area until early '60es; when it disappeared. There were some initiatives to reintroduce the species, but they all failed. Then, early in this century, some couples spontaneously started nesting in Dombes again. Since then, the species reproduces regularly, in a strictly protected areas. I don't have the fresh info on how many the population is currently estimated; but they are back...