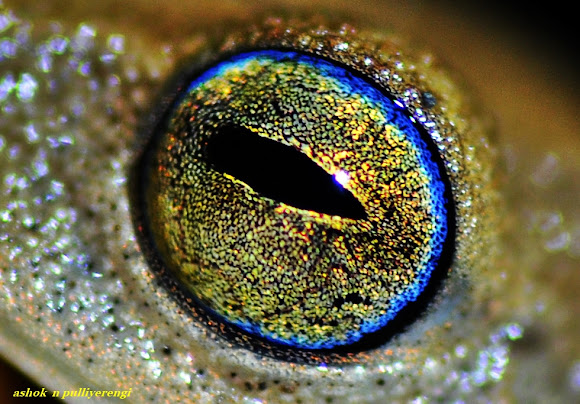 Cute Frog of the western ghats in India, photographed this blue eyed bush in rainforests of agumbe in southern India. The blue-eyed bush frog (Philautus neelanethrus), named after its colorful irises, also has a unique orange skin color. The blue-eyed bush frog is an endangered species found in southwest India. It lives in river basins or swamps, but does not depend on water to breed. However, due to recent dam construction and urbanization in the Western Ghats of India, the blue-eyed bush frog population has become fragmented and is decreasing. Scientists hope that these threats can be minimized so that populations of this species listed as endangered may one day recover

thank you friends for the appreciation :)

Beautiful, thanks for sharing and congrats :)

Congratulations for SOTD Ashok!!! Incredible photos. Thank you for sharing :)

Congrats Ashok for the SOTD!!

Congrats Ashok, your adorable frog has earned you Spotting of the Day! This stunning blue-rimmed eye belongs to a rare frog from southwest India. Sadly the population of blue-eyed bush frogs has become fragmented and is decreasing because of urbanization in the Western Ghats and the species is now endangered.

Excellent capture ...You should put second photo in cover :)