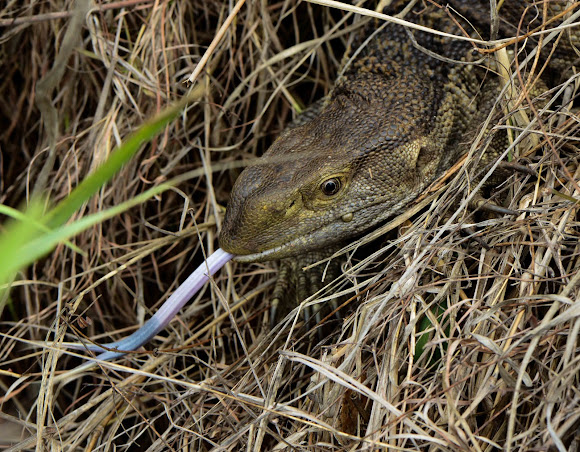 Key Features: a swollen snouth with the nostril slits being closer to the eyes than the end of the snout, a large powerful tail and sharp claws on the feet. This is the heaviest-bodied lizard in Africa, as adult males average about 6 to 8 kg (13 to 18 lb) and females weigh from 3.2 to 5 kg (7.1 to 11 lb). This Rock monitor was between 30-40 cm. Very calm and it it let me come very close to in (0,5 meter with the camera). It was lying in a slope, and it was impossible to take a full body size picture with the macro-lens... After ten minutes it slowly moved away in the high grass...

Slope towards a dried out creek/river. High dry grass and stones. Start of the summer (rain season)

The white throated-monitor is one of almost 60 species of powerfully built lizards belonging to the genus Varanus. All monitor lizards are recognised for their elongate bodies, strong limbs, muscular tails and robust claws. Until 1989 the white-throated monitor and the savanna monitor (Varanus exanthematicus) were considered to be the same species. Following their separation, three geographically separated subspecies of the white-throated monitor have been described: Varanus albigularis albigularis; V. a. angolensis: and V. a. microstictus. Although primarily a terrestrial species, the white throated monitor will climb trees to hunt for prey, to reproduce, and to avoid predators. If confronted on the ground by a predator, such as a honey badger, it will puff up its throat and body, lash out with its tail, and bite violently. During the summer it is active throughout the day, except during midday in regions where temperatures are extremely high. It hunts for a wide range of prey and will eat just about anything it can subdue, from snakes, birds and eggs, to snails, millipedes and grasshoppers. Although the white-throated monitor remains alert during the winter months, it is far less active and generally remains in its overnight refuge, which usually takes the form of an earth burrow or hollow tree trunk. Although the white-throated monitor is widespread and common, it is occasionally targeted by humans for food. During the breeding season, receptive females almost always climb into trees. Once a male locates a female, the pair will mate for one to two days before the male goes in search of another female (3). Each year, a female may lay two clutches of up to 50 eggs (5).