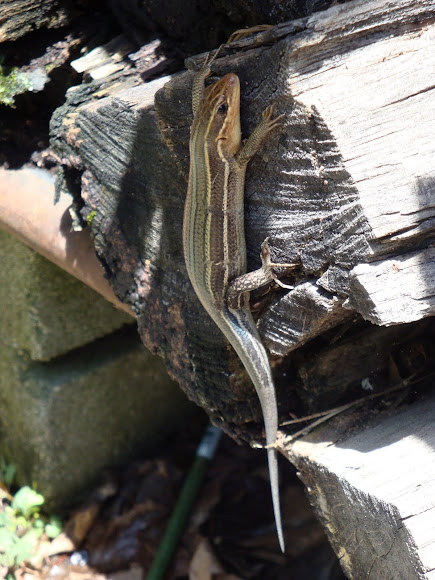 "Description: 5 - 8.5 in (12.5 - 21.5 cm). Five-lined skinks are moderately large lizards with short legs and a streamlined body. The body is generally gray, brown, or black, in background color with five white or yellowish stripes (two on each side and one down the center of the back). Young have a bright blue tail while adult males often loose their stripes and develop reddish or orange coloration on the head. This species is very similar in appearance to the southeastern five-lined skink and broadhead skink and is usually only identifiable by close examination of the scales: five-lined skinks have an enlarged row of scales under the tail and four labial (along the upper lip between the nose and eye) scales. Additionally, the broadhead skink usually larger and the southeastern five-lined skink usually inhabits dry, sandy habitats."

"Range and Habitat: Five-lined skinks range throughout Georgia and South Carolina and are equally at home on the ground and in trees. Five-lined skinks may be found in almost any habitat, but are most common in wooded areas with an abundance of fallen trees and stumps to hide in. Five-lined skinks prefer moister habitats that the similar southeastern five-lined skink, and are particularly common in bottomland forests and along wooded river margins."

"Habits: Five-lined skinks may be found on the ground or in trees, but are generally less arboreal (tree dwelling) than broadhead skinks. Although sometimes seen in the open, these lizards are most often found beneath logs or under tree bark. When pursued, five-lined skinks generally run for the nearest tree or log and can be quite difficult to capture. Like many other lizards, five-lined skinks will break off their tails when restrained, distracting the predator and allowing the lizard to escape. Prey: Five-lined skinks prey on a wide variety of insects, spiders, and other invertebrates. Reproduction: Female five-lined skinks lay clutches of several eggs in moist soil or rotten logs during the summer and attend the eggs until they hatch about 60 days later. Abundance: Five-lined skinks are common in most areas of Georgia and South Carolina, but are most abundant in the Piedmont. This species is notably absent from many coastal areas and barrier islands. Notes: The blue-tailed young of five-lined, southeastern five-lined, and broadhead skinks are widely referred to as "scorpions" and are believed to have a venomous sting. While this belief is completely false, some scientists speculate that these skinks are bad-tasting to many predators."