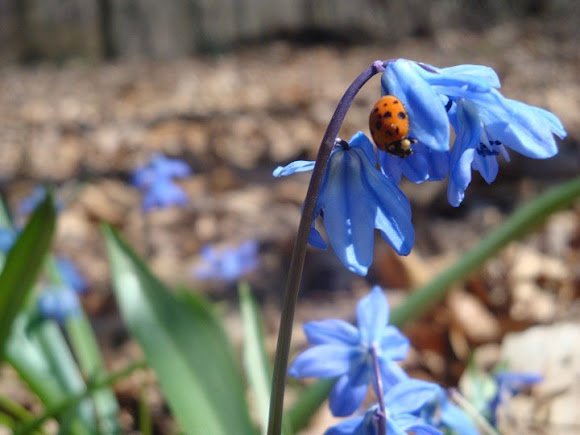 "Coccinellidae is a family of beetles, known variously as ladybirds (UK, Ireland, Australia, Pakistan, South Africa, New Zealand, India, Malta, some parts of Canada and the US), or ladybugs (North America). Scientists increasingly prefer the names ladybird beetles or lady beetles[1] as these insects are neither birds nor true bugs. Lesser-used names include ladyclock, lady cow, and lady fly.[2] Coccinellids are small insects, ranging from 1 mm to 10 mm (0.04 to 0.4 inches), and are commonly yellow, orange, or scarlet with small black spots on their wing covers, with black legs, head and antennae. A very large number of coccinellid species are mostly, or entirely, black, grey, or brown and may be difficult for non-entomologists to recognize as coccinellids. Conversely, there are many small beetles that are easily mistaken for coccinellids, such as the tortoise beetles. Coccinellids are found worldwide, with over 5,000 species described,[3] more than 450 native to North America alone."

"A few species are considered pests in North America and Europe, but they are generally considered useful insects as many species feed on aphids or scale insects, which are pests in gardens, agricultural fields, orchards, and similar places. Harmonia axyridis (or the Harlequin ladybug) was introduced into North America from Asia in 1988 to control aphids but is now the most common species as it is out-competing many of the native species.[4] It has since spread to much of western Europe, reaching the UK in 2004.[4][5] A common myth is that the number of spots on the insect's back indicates its age."

What type of flowers are those?